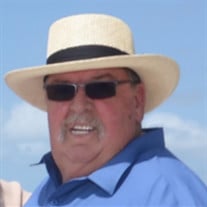 Services will be held Saturday, August 28, 2021 at 1:00 P.M. at the First Baptist Church Mobeetie, TX. Pastor Jim Zenger and Pastor Travis Leamon officiating. Burial will follow in Wheeler Cemetery, Wheeler, TX. Viewing will be held Friday from 9:00 AM - 7:00 PM at the funeral home. Arrangements are by Robertson Funeral Directors of Wheeler. Weldon V Simmons, 67, moved to his heavenly home on Tuesday, August 24, 2021, where he certainly heard well done my good and faithful servant after a life well lived. Weldon was born November 21, 1953 in Wellington, Tx to Virgil and Joann Simmons. He graduated from Wheeler High School Class of 1972. July 10, 1975, he married Dolores Patterson in Wheeler. In December 1982, the sparkle of his eye, a daughter, Jotana was born. He spent the rest of his life being the best Daddy to her. Weldon loved the Lord. He was a member the First Baptist Church Mobeetie. His servant heart saw him in many roles as he loved others as Christ loved him. Missions were dear to his heart. Weldon spent many hours organizing and leading trips to remodel and rebuild churches across many states. A lifelong resident of Wheeler, Weldon was Mustang fan through and through. He not only followed but enjoyed all the sports and activities the Mustangs were taking part in. Whether it was the marching field, the show ring, football field or anything in between, Weldon could be found cheering for the kids. He was a sports fanatic and could usually be found with some sport on every TV in the house. He spent many hours keeping up with the stats in the rodeo world. He particularly enjoyed the PRCA and PBR. Attending the National Finals with his family was one of the highlights of his year. Weldon was known as The Fun Guy! Children were drawn to him. He played an important role in many children’s lives as he poured his love and knowledge in to them. Many encountered his love as they passed through Bubby and Lorse’s home for daycare. He led youth groups where he shared his love of Christ. His nieces and nephews held a sweet spot with their Bubby. He followed them on all their fun in activities, sports and rodeos through the years. Those who love him most will be left with memories to last a lifetime. Weldon enjoyed food and finding “the best” which sometimes was a hole in the wall spot or may be a 5 Star restaurant. Following “The Fun Guy”, the family has traveled a million miles taking trips, sailing seas, seeing sites and having adventures. Those left to cherish Weldon’s memory are his wife of 46 years, Dolores of Wheeler. Daughter Jotana Henson and TA Taylor, Grandchildren Kellan Quarles, Kayleigh Coomer, A’Dyn Garza, and Ty Taylor. Brothers Steve Simmons (Suzy), Walter Simmons (Phyllis) and Sister Deleise Atwood (Riley) and Brother in Law Tim Patterson (Terrie), 4 nieces and 4 nephews as well as 26 great and great great nieces and nephews. Memorials in Weldon’s honor may be made to Riding High Ministries PO Box 402 Shelley, Idaho 83274

The family of Weldon Virgil Simmons created this Life Tributes page to make it easy to share your memories.

Send flowers to the Simmons family.