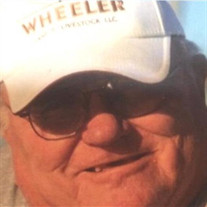 Wayne Vincent Kuehler, 83, of Wheeler died Sunday, February 16, 2020 in Wheeler. Rosary will be said 6:00 PM Monday, February 17, 2020 in Robertson Funeral Directors in Wheeler. Mass will be celebrated at 1:00 PM Tuesday, February 18, 2020 in St. Mary's Catholic Church in Wheeler with Fr. Jo Konkala as the celebrant and Fr. Nicholas Gerber as concelebrant. Burial will follow in Wheeler Cemetery in Wheeler. Arrangements are by Robertson Funeral Directors of Wheeler. Wayne Vincent Kuehler was born June 15, 1936, the eldest of 9 children, to Louis and Elizabeth Kuehler in Munday Texas. He graduated from Morton High School in 1953. He ran a local grocery, farmed and worked in the cotton gins and fields of Cochran County. He then moved to Dallas and was a store manager for Kroger. There he met and married Toni Willoughby in 1972. They moved to Wheeler to join the family farming and ginning at M&M Gin and farms. He was a founding member of St. Mary’s Catholic Church in Wheeler, where he served as the Head of Finance until December of 2019. He was a former member of the Wheeler School Board, and a lifetime donor to Coffee Memorial Blood Center. He retired from farming and raising cattle and moved to his house in town in 2000. He spent countless hours driving the Blue Bird and Frye Ranches, checking cattle, ponds, fences and wells and loved them like his own. He also devoted his time as a caregiver and companion to friends Vern Lohberger, Ruth Ledbetter, Glen Elmore and Tom Frye Sr. (and Tippy). He loved sports, fishing, crossword puzzles and the Rosary. He is preceded in death by his parents, his in laws WD and Mary Mitchell and Bob Willoughby, his son in law Ed Rice, brothers Melvin and Clem and sister Debbie Rice. He is survived by his wife of 48 years and 1 day, his daughter Vicki Rice of Morton, son Richard Kuehler and wife Treva of Morton, daughter Bobbie Bruhn and husband Damian of Amarillo, and daughter Reese Munoz and husband Carlos of Floydada. 10 Grandchildren: Michael Rice, Holly Boggs and husband Derrick, Kasey Kuehler Brown and husband Kris, Kody Kuehler, Grant Ledbetter, Grady Ledbetter, Mikaela Bruhn, Hannah Bruhn, Sadie Bruhn and Eli Munoz. 4 great grandchildren: Abi, Ethan, Kayleigh and Britton Boggs. He is also survived by sister Betty Lyon of Morton. Brothers Glen Kuehler and Donnie Kuehler and wife Kellye of Lake Alan Henry and sister Joan Sowder and husband Terry of Morton , Sister in law Lynne Kuehler of Granbury, Sister in law Carolyn Hefley and husband Jerry of Wheeler, brother in law Skip Lovejoy and wife Jodi of Claremore Ok , and countless cousins, nieces and nephews and God children. The family request memorials be sent to Alcove Care or St. Mary's Catholic Church in Wheeler.

The family of Wayne Vincent Kuehler created this Life Tributes page to make it easy to share your memories.

Send flowers to the Kuehler family.