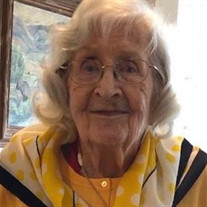 Vircie Godwin Dysart of Graham, Texas, formerly of Amarillo, celebrated a grand 100th birthday in September 2019, and was &#8216;ready to go&#8217; on February 15.... after getting President Trump and Governor Abbott elected. Her joy was being... View Obituary & Service Information

The family of Vircie Verl Dysart created this Life Tributes page to make it easy to share your memories.

Send flowers to the Dysart family.