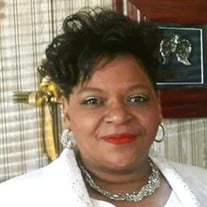 God's angel was dispatched and Traci Dawn Hunnicutt transitioned to her heavenly home on March 12, 2021, at the age of 54. Services are scheduled for Saturday, March 20, 2021, at 2:00 PM at Victory Temple Full Gospel Church in Wellington, Texas, with Rev. Tyrone Campbell, Rev. Herman Moore, and Rev. Charles Coleman, officiating. Arrangements are by Robertson Funeral Directors of Clarendon. Traci was born December 7, 1966. She was the third child of five born to the proud parents of RL and Fredonia Hunnicutt. She grew up in Wellington. Traci graduated from Wellington High School in 1985, and was voted the Wittiest in her class. She was a member of the 2-2A All-district basketball team, played on the All-Star team, was a member of the cheerleading squad and the varsity track team. Traci won Best Actress in the UIL district. Upon completion of high school, she was offered a drama scholarship to Amarillo College. She later attended Clarendon College receiving her Licensed Vocational Nursing degree and was the Valedictorian of her class. She worked as an LVN for over twenty years. Traci was a fun loving, styling, tell it like it is, family person. She will be greatly missed by her family, the Meadows and the Hunnicutts. She was an active member of Victory Temple Full Gospel Church where her father served as pastor. Traci is now reunited in Heaven with her brother, Mark Kelly Hunnicutt; and her grandparents, Odell, Sr. & Lucy Meadows, and Joel & Ada Belle Hunnicutt. Traci leaves to cherish his memories and God will comfort; her son, Austin Ross Jodell Hunnicutt-Cole (Arvellisa Harris-Cole); her granddaughter, Micala Cole; siblings, Silvia (Steve) Gardner all from Gastonia, NC, Jodi (Jimmye) Bookman of Wellington, TX, RL "Snapper" (Paulette) Hunnicutt, II, of Oklahoma City, OK, and Doris Thomas of Altus, OK; as well as a host of nieces, nephews, aunts, uncles, cousins, schoolmates, and friends.

God's angel was dispatched and Traci Dawn Hunnicutt transitioned to her heavenly home on March 12, 2021, at the age of 54. Services are scheduled for Saturday, March 20, 2021, at 2:00 PM at Victory Temple Full Gospel Church in Wellington, Texas,... View Obituary & Service Information

The family of Traci Dawn Hunnicutt created this Life Tributes page to make it easy to share your memories.

Send flowers to the Hunnicutt family.