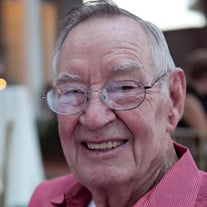 Tony Ross Smitherman was born on December 15, 1931 to Jack and Aileen Smitherman of Hart, Texas. Tony attended Hart schools where he was an Eagle Scout and played basketball and baseball. He played basketball for West Texas State University before joining the Navy where he served for four years during the Korean conflict. Tony worked for Chance Vought in Arlington, Texas designing guidance systems for satellites after his time in the Navy, then returned to Hart to farm. February 11, 1961 he married Monta Jean Kennedy in Hart, Texas. Their oldest child, Rue Beth was born February 16, 1962 in Plainview, Texas. They moved from Hart to McLean, Texas in 1963 where he was a farmer and rancher for over 50 years, Tony Bryan was born September 16, 1965 in McLean, Texas. While living in McLean Tony served as school board president, a 4-H leader, and served on the Soil Conservation Board. He was an active member of the McLean United Methodist Church. Tony completed his earthly journey December 26, 2021. Tony was preceded in death by his beloved wife of 59 years, Monta Jean Kennedy Smitherman, his parents Jack and Aileen Smitherman, and sisters Polly Simpson and Patsy Harper. He is survived by his sister Edith Rue Bralley of Amarillo; children daughter Rue Beth Smitherman Campbell and Son-In-Law James Campbell of Allen, and son Tony Bryan Smitherman of Lubbock. He is survived by grandchildren Lauren Campbell Sharma, husband Rahul Sharma, and son Jax Sharma of Little Elm; Thomas, Jennifer and Kevin Campbell of Allen; and Ross and Carol-Anne Smitherman of Lubbock. Tony has been blessed with many nieces and nephews and their children, all of whom he loved deeply. Tony will always be remembered for his infectious smile, kind and gentle spirit, and love for all. Tony never met a stranger, and was beloved by all who knew him. Visitation will be held Friday, December 31, 2021 at 10:00 am at the United Methodist Church in McLean, Texas. Funeral service will follow at 1:00 pm. At the United Methodist Church. The family requests memorials to be donated to First United Methodist Church in McLean, Texas. Arrangements are by Robertson Funeral Directors of McLean.

Tony Ross Smitherman was born on December 15, 1931 to Jack and Aileen Smitherman of Hart, Texas. Tony attended Hart schools where he was an Eagle Scout and played basketball and baseball. He played basketball for West Texas State University... View Obituary & Service Information

The family of Tony Ross Smitherman created this Life Tributes page to make it easy to share your memories.

Send flowers to the Smitherman family.