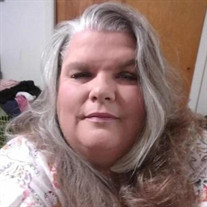 Tonja Jo Davis, 46, of Claude died Thursday, September 3, 2020 in Amarillo. Graveside services will be 10:00 AM Wednesday, September 9, 2020 in Memory Gardens Cemetery in Pampa with Royce Mason, officiating. Arrangements are by Robertson Claude Chapel. Tonja Jo Davis was born in Groom, Texas on March 15, 1974 to Betty Jo Parsley and James R. Walker. At the age of 2 she got a step mother, Coela Walker. There was a bond between them that lasted all her life. She had one son, Logan Austin Harvey who was born on November 2, 2004. She was so proud of him. Her eyes would light up when any one would mention his name. She married the love of her life, Ricky Davis on March 15, 2014. They lived in Claude, Texas where Tonja was so happy being a homemaker. She loved Jesus at an early age, and she loved to sing praises to Him her whole life. She gave her testimony for Christ through song at many church services. Heaven gained a new angel on September 3, 2020. Tonja was 46 years, 5 months, and 19 days. She was preceded in death by her step father, Ronny Parsley and all grandparents. She is survived by her husband, Ricky of the home; her son, Logan Harvey of Oklahoma City; her mother, Betty Parsley of Amarillo; her father and step mother, James and Coela Walker of Amarillo; and a mother in law, Peggy Davis. She also leaves 6 step children, Amanda Dalryample, Katie Coleman, Taryn Elbin, Christopher Chaney, Josh Davis and Eric Davis. She had 10 grandchildren and another one due in December. She leaves to mourn her passing 5 sisters and 5 brothers. She also left a little black dog, Lilly. We will all see her again one day in Heaven. At the family's request there will be no viewing.

The family of Tonja Jo Davis created this Life Tributes page to make it easy to share your memories.