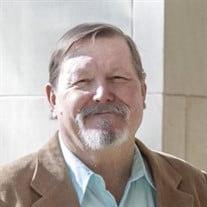 Viewing will be Sunday from 1:00 to 6:00 pm at Robertson Funeral Directors in Claude, Texas. Funeral services will be held at 1:00 pm in Claude at the Church of Christ on Monday, August 2nd with graveside services immediately following at Llano Cemetery - East (Garden of Precious Memories. Corner of SE 29th & Arthur Street) in Amarillo. There will be a gathering after the graveside services at Central Church of Christ (1401 S. Madison St. Amarillo, Texas). Thomas Harvey Fletcher III was born on December 16th, 1943, in Glendale, California to Harry and Evelyn Fletcher. He dearly loved his brother Danny and sister Harriet. He grew up on Army bases and loved to play sports. He graduated from Enterprise High School in Enterprise, Alabama, in 1962. He was in the ROTC at West Texas State University where he met his wife Frances Camp. They were married in Canyon on December 30th, 1966. This year would have been their 55th year of marriage. After he graduated in May 1969, he entered the army as an officer that August. He was later promoted to captain and served in Panama and Vietnam. Tom and Fran had four beautiful, healthy children and a niece over the next 14 years while living in Panama, Odessa, and Phoenix before settling in Amarillo and then Claude, Texas. He worked as a bookkeeper at Gilvin-Terrill and Conner Industries. After retiring, he worked at the Palo Duro Nursing Home and enjoyed getting to know its residents when he drove them to their appointments in Amarillo. He loved God, his family, golf, reading, and watching football. He frequented the Claude library so often he was nicknamed the "Daily Dude” by the students. He said the happiest moments of his life were his wedding day, the births of his children, the weddings of his children, and the births of his grandkids. Tom passed at home with Fran by his side in the early morning of Wednesday, July 28th. His life was filled with special moments he shared with people he loved. Tom made everyone he came in contact with feel special and important with his positive and genuine words. He was known for going out of his way to say hello or to thank veterans and active military for their service. Tom approached everyone as though they had been lifelong friends. He was preceded in death by his parents. He is survived by his wife, Fran Fletcher; his five children, Mary Lewis, Melissa Liles and her husband Robin, Bill Fletcher, Amy Horn and her husband Powder, and Julia Mason and her husband Keith; his siblings, Harriet Jones (Nashville, Tennessee) and Danny Fletcher (San Antonio, Texas); and his uncle Fred Wilson and his wife, Patsy (Prosper, Texas). He was blessed with 11 grandchildren: Tanner Lewis, Cassidy Burns, Halie Fletcher, Emory Horn, Schuyler Liles, Ashleigh Hatfield, Brandon Hatfield, Khloe Shadle, Alex Barrett, Katelyn Lucas, and Landon Carpenter. He loved being an extra granddad to extended family and his grandkids’ friends. The family requests memorials be made to the Claude Public Library, 605 High St, Claude, TX 79019

Viewing will be Sunday from 1:00 to 6:00 pm at Robertson Funeral Directors in Claude, Texas. Funeral services will be held at 1:00 pm in Claude at the Church of Christ on Monday, August 2nd with graveside services immediately following at... View Obituary & Service Information

The family of Thomas Harvey Fletcher, III created this Life Tributes page to make it easy to share your memories.