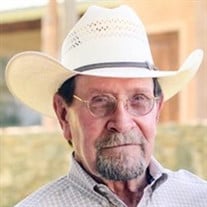 Thomas “Corky” Eugene Berry of Sweetwater, Oklahoma, passed away on October 21, 2020. Graveside service will be held at 10:00 A.M., Saturday, October 24, 2020, at the Walker Ranch Cemetery in Sweetwater, Oklahoma. Arrangements have been made by the Robertson Funeral Directors in Wheeler, Texas. Thomas “Corky” Eugene Berry, 84, of Sweetwater, Oklahoma, passed away from this life October 21, 2020, to his eternal reward with the Lord and Savior. Corky was born and raised in Tulia, Texas, on December 4, 1935, to Jack and Katharine Berry. He was the oldest of four siblings—Ray Lynn, Lafone, Francis, and Debra. He served in the United States Army from 1958-1960. Upon his return from Germany, he married Julia Fay Culwell. Together they resided in Tulia for many years raising three children—Karl, Carmen, and Celia—on a homestead south of town where his son Karl still lives today. Corky was an avid horseman, a World Champion Steer Roper, and a man with many stories to share. He was preceded in death by his parents, his sister Lafone Holligan, his brother Ray Lynn “Slim” Berry, and granddaughter Kaci Dawn Howard. Those left behind to cherish his memory are his son Karl Berry of Tulia, Texas; his daughter Carmen Jessop of Presho, South Dakota; his daughter Celia Gibbs and son-in-law Tim Gibbs of Graford, Texas; his sister Debra Cook and husband Doug Cook of White Deer, Texas; and his sister Francis Doyal of Amarillo, Texas. He also leaves behind ten grandchildren, 10 great-grandchildren, numerous nieces and nephews, and many friends. He will be greatly missed by many cowboys and cowgirls.

The family of Thomas "Corky" Eugene Berry created this Life Tributes page to make it easy to share your memories.

Send flowers to the Berry family.