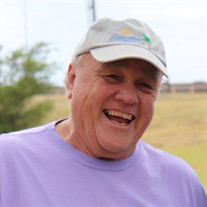 Terry F. Allen, 71, of Clarendon, Texas, passed away on December 5, 2020, after a brief battle with COVID. Cremation and arrangements are by Robertson Funeral Directors of Clarendon. Born in Wichita, KS, on November 29, 1949, Terry graduated from Anthony High School in 1967. He was a graduate of Northwestern Oklahoma State University, where he earned his undergraduate and graduate degrees in Education. As a lifelong advocate for children and learning, Terry taught in USD 361 at Anthony Elementary and Junior High Schools for thirty-two years. In addition to teaching K-8 physical education, he coached football, basketball, and track for over two decades. Terry was active in the Harper County NEA during his tenure as a professional educator. During summer holidays, Terry worked for the City of Anthony (KS) summer recreation department and also owned a tree spraying business. Terry loved watching college and pro sporting events, and also owned numerous thoroughbred horses. He enjoyed serving his community on the Anthony Downs Race Board and the Forest Park Cemetery Board. Terry was most known for being a devoted husband, father, and grandfather. He was preceded in death by his mother, father, and brother. He is survived by his wife of fifty years, Carol (Hoel) Allen, son Jeff (Jennifer), daughter Stephanie Halsey (Matt), and grandchildren Avery, Kennedy, and Cotton. In lieu of funeral services, memorial donations may be made to the Anthony Recreation Commission, 124 S. Bluff, Anthony, KS, 67003, or the First Baptist Youth of Clarendon, 300 Bugbee Avenue, Clarendon, TX, 79226. Terry will be cremated and his ashes interred at Forest Park Cemetery on a later date.

Terry F. Allen, 71, of Clarendon, Texas, passed away on December 5, 2020, after a brief battle with COVID. Cremation and arrangements are by Robertson Funeral Directors of Clarendon. Born in Wichita, KS, on November 29, 1949, Terry graduated... View Obituary & Service Information

The family of Terry F. Allen created this Life Tributes page to make it easy to share your memories.

Terry F. Allen, 71, of Clarendon, Texas, passed away on December...

Send flowers to the Allen family.