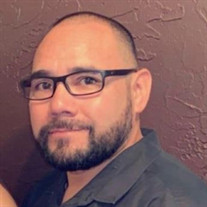 Saul Leonardo Engles, 47, of Wheeler died Friday, September 24, 2021 in Mesquite. Services will be 11:00 Am Wednesday, September 29, 2021 in the First Baptist Church in Wheeler with Sergio Montoya, officiating. Burial will follow in Wheeler Cemetery in Wheeler. Viewing will be held Tuesday at the funeral home. Arrangements are by Robertson Funeral Directors of Wheeler. Saul was born June 9, 1974 in El Paso, texas to Virgil Duane and Bertha Benavidez de Engles. He married Vanessa Porras on December 4, 1991 in El Paso, Texas. He had been a resident of Wheeler since 2004 and had worked in the oil field as a motorhand. His hobbies included detailing and restoring cars. He loved his family and enjoyed spoiling his granddaughters buying them McDonald's every chance he could. He was a good husband, father, son, and loving grandpa. He was a great example to his family and loved by everyone. He was a member of Salmos 23 Church. He was preceded in death by his father. Survivors include his wife, Vanessa Engles of Wheeler; his mother, Bertha Benavidez de Engles of El Paso; his son, Jonathan Engles of Wheeler; his daughters, Maricela Rincon of Pampa, Leslie Engles and Diamond Engles both of Wheeler; his sister, Claudia Hinojos of El Paso; his grandchildren, Monica Rincon, Mia Rincon, and Melanie Rincon who is on the way; his nephew, Miguel Licon; his niece, Evelyn Moscosa; his Godchild, Destiney Licon; and several great nieces and nephews.

Saul Leonardo Engles, 47, of Wheeler died Friday, September 24, 2021 in Mesquite. Services will be 11:00 Am Wednesday, September 29, 2021 in the First Baptist Church in Wheeler with Sergio Montoya, officiating. Burial will follow in Wheeler... View Obituary & Service Information

The family of Saul Leonardo Engles created this Life Tributes page to make it easy to share your memories.

Send flowers to the Engles family.