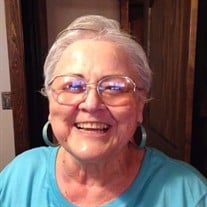 Sandra "Sondie" Lea Hansard Springer, 76, of Memphis, went to be with the Lord on Saturday, May 22, 2021, at the Memphis Convalescent Center under Hospice care from Childress. Funeral services are scheduled for Friday, May 28, 2021, at 2:00 PM at the First Baptist Church in Memphis. Burial will follow at Fairview Cemetery with Rev. Daniel Downey and Kelly Beckworth officiating. Arrangements are by Robertson Funeral Directors of Memphis. Sandra, known affectionately as Sondie, was born on December 7, 1944 in Memphis, TX, to V.A. and Ida May Robertson Hansard. Sondie attended school at Lakeview and Memphis. She graduated from Memphis High School and attended West Texas State University in Canyon, TX. She married Don C. Springer on July 7, 1993 at the First Baptist Church Chapel in Memphis. They were married by Brother O.K. Bowen. Sondie worked for Hall-Donley County Farm Bureau as a secretary for over 30 years. She was a people person and loved her customers and they loved her. They would come in and talk and visit with her whether business or not. She received many awards for being the top secretary for Farm Bureau throughout her career. She also prepared income taxes for the public. Sondie also assisted her husband, Don in his cattle operation. She loved to help move equipment and watch Don feed and work cattle. Sondie loved the Lord and her church family. She was the church secretary for business meetings and several church committees. Sondie loved to take trips and among her most memorable trips were to the Holy Lands, Hawaii, and Alaska. She also loved to go to football games and watch Robin twirl and later watch the grandchildren play sports. She was known for being a great cook. She baked many wedding and birthday cakes. She also enjoyed taking food to families during a time of need. She worked hard all day and would come home each evening and prepare a meal for her family and loved to make cakes and pies for Don. She loved her family and was loved by them. She helped raise Robin and loved her as if she was her own. She had a hardy laugh and was loved by everyone. She was preceded in death by her mother Ida May, and her father, V. A. Hansard. Her father was killed in action in WWII as a bomber pilot shortly after Sondie’s birth. V. A. Hansard is buried in a military cemetery in Cambridge, England. She was also preceded in death by her brother, Ricky Collins and step-father Clyde C. Collins. Sondie is survived by her husband, Don; and sister, Debbie Louise Collins of the home. She is also survived by her children: son – Rick Springer and wife, Carla of Childress; daughter – LaMoss Lambert of Memphis; and daughter – Robin Kay Clouse and husband, Chris of Houston. 5 grandchildren: Patrick Lambert, Kayla Villenueva, Colton Springer, Rochell Brown, and Cody Clouse, and 5 great grandchildren. She is also survived by several cousins, many friends, and co-workers. The family request memorials be sent to First Baptist Church / 121 S. 8th Street / Memphis, TX 79245.

Sandra "Sondie" Lea Hansard Springer, 76, of Memphis, went to be with the Lord on Saturday, May 22, 2021, at the Memphis Convalescent Center under Hospice care from Childress. Funeral services are scheduled for Friday, May 28, 2021, at 2:00... View Obituary & Service Information

The family of Sandra "Sondie" Lea Springer created this Life Tributes page to make it easy to share your memories.

Send flowers to the Springer family.