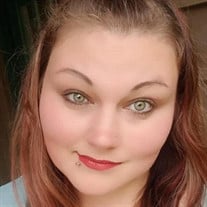 Sabrina Chantel Reeves, 29 years old of Wheeler, Texas, passed away on Wednesday, April 7, 2021 in Wheeler, Texas. Services will be held at 3:00 PM on Wednesday, April 14, 2021 at the Cornerstone Church in Wheeler, Texas, with Erron Mercer officiating. Graveside to follow at the Wheeler Cemetery. Arrangements are by Robertson Funeral Directors of Wheeler. Sabrina was born on January 20, 1992 in Shreveport, Louisiana, to Edward Reeves and Tina Brackman. She had lived in Wheeler for the last 20 years of her life. She was a proud LVN and enjoyed her work. Sabrina loved shopping, her kids, vacationing, and her friends and family. She was known for doing anything for anybody. She was preceded by her maternal grandparents, Dan Eugene Frederick and Pauline Stephenson. Survivors include her spouse, Jonathon Gray; her parents, Edward Reeves and Tina Brackman; 2 children, son Jasper Gray and daughter Sarina Reeves; 3 brothers, Edward Reeves Jr., Mathew Brackman, and Michael Brackman; 2 sisters, Christina Davidson and Theresa Reeves; niece and nephews, Caleb Reeves, William Reeves, and Rainbow Reeves.

The family of Sabrina Chantel Reeves created this Life Tributes page to make it easy to share your memories.

Send flowers to the Reeves family.