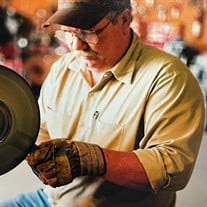 Ronald Gene Tollison, 67, of Shamrock, passed away on December 7, 2021 in San Antonio. Graveside services will be held on Saturday, December 11, 2021, at 10:00 AM in the Shamrock Cemetery with Michael Chase, officiating. Viewing will be at Robertson Funeral Directors, Friday December 10, 2021 from 9:00 AM to 6:00 PM. Arrangements are by Robertson Funeral Directors of Shamrock. Ron was born to Virgil Tollison and Louis Gene Prince in Chickasha, Ok on January 8th, 1954. Ronald first came to Shamrock, TX in 1971 on a Greyhound bus. He worked alongside his cousin and father at the Whiting Brothers Gas Station. While working here, he met his wife, Darlene Edwards. They finished off this year with their 50th anniversary as of July 25th, 1971. Over the years they had three sons, Billy Tollison of Hammon, Ok, Heath Tollison and wife Alisha of Carter, Ok and Dustin Tollison of Shamrock, TX. Ron and Darlene were blessed to have enjoyed countless times with their numerous grandkids and surplus of animals. He was a master of all trades starting from being a carpenter, to a mechanic all the way to being a renowned and well-known Bits and Spur maker. Ronald's passion for bits and spur making started when he spent his weekends in Erick, OK mentored by Erlon Shirley. As his career began he met another renowned bits and spur maker, Billy Klapper from Pampa Tx. Little did he know that was the beginning of a great friendship. Ron had a great love for what he did but that didn’t stop him from tinkering with so many other projects he had around the house. One project in particular and most recent was a boat. Ron enjoyed fishing and dreamed of trolling the lakes. Ever since he got this boat earlier this year, he never stopped working on it, cleaning it and most importantly never stopped talking about it. He is preceded in death by his parents, step-dad Bert Collier, brother Randall Tollison and sister Clarissa Ruth Waller. Ron is survived by his wife, Darlene Tollison, his sons Billy, Heath and Dustin Tollison, his grandkids, Hannah, Bryan, Micheal, McKinnley, Kristin, Lexie, Payton, Cheylee, Brayden, Bristol, Braxton, Brinley and 5 great grandkids, Addison Rose and Cerinity Rayne Tollison, Audrey, Isaac, and Pryor Hall. Ron was loved by so many friends and family and left such a mark on everyone involved with the WRCA.

Ronald Gene Tollison, 67, of Shamrock, passed away on December 7, 2021 in San Antonio. Graveside services will be held on Saturday, December 11, 2021, at 10:00 AM in the Shamrock Cemetery with Michael Chase, officiating. Viewing will be at... View Obituary & Service Information

The family of Ronald Gene Tollison created this Life Tributes page to make it easy to share your memories.

Ronald Gene Tollison, 67, of Shamrock, passed away on December...

Send flowers to the Tollison family.