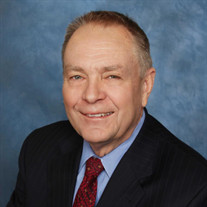 Robin Morris Green, 77, of Lubbock, Texas, died on December 9, 2021. Born on November 13, 1944, in Grand Prairie, Texas, to Horace and Naomi Green, Robin was the oldest and self-decided “Mom’s favorite” of seven children. The family lived on a farm near Clarendon, Texas, in a community of loving grandparents, friends, and family. Robin attended a two-room school in Ashtola, Texas, Clarendon High School (1963), McMurry College (B.A. 1967), and Texas Tech University School of Law (J.D. 1969 - one of 14 in the first class). Robin started his 52-year law career as an Assistant District Attorney for Potter County in Amarillo, Texas, followed by private practice firms in Amarillo and Lubbock, always passionately advocating for his clients. Robin championed civil rights, and was determined to challenge any obstacle that threatened those rights, as reflected in several high-profile and controversial cases and his participation in civic organizations. Robin shared his time and his idealism with family, friends, and contrary lunch companions, so many conversations including: “but, you didn’t ask me how to make a clock.” But of course, we always hoped he’d tell us. Robin was an advocate for education, voter rights, and equal treatment under the law. Robin volunteered at local schools, tutoring and reading with students, insisting the time was more a gift to him than the students. He was also active in the South Plains Food Bank, the Boys and Girls Club, the Texas American Civil Liberties Union, and the United Methodist Church, and felt blessed that he was counted as a friend to many. While maintaining an active practice in civil trial law and community service, Robin planned many camping trips, rafting trips, visited kids and grandkids, attempted to educate us all in history, the arts, American music, and never went too long between optimistic environmentally sound garden projects (that required more watering than he could schedule, despite recruiting nieces and clerks). Robin is remembered for his love of nature, travel, exercise, enthusiasm for life, his curiosity, his search for an understanding of the human condition, and his inclusion of all people. A good friend stated that the world is going to be a “less friendly and kind place without Robin.” Robin is remembered for all the joy and happiness he brought to the world. Robin is survived by his wife, Paulina Jacobo; sisters Patricia Friesen, Beth Stepp, and Ellen Morehart; children Robin Morris, Benjamin, and Margaret; and the ones he claimed, Mateo, Lissa, Laura, Christopher, Kayla, Unique, and Destiny; eight grandchildren; eight great-grandchildren; and numerous nieces, great-nieces, nephews, great-nephews, friends, and colleagues. Robin was preceded in death by his parents and three brothers. A private family burial will precede services on Saturday morning, December 18, 10:30 a.m., at the First United Methodist Church, 420 South Jefferson Street, Clarendon, Texas, where Robin and his family have been members for many generations. The family respectfully requests that all who attend the service wear masks. A celebration of life will be held in Lubbock, Texas, at a later date. In lieu of flowers, memorials are suggested to First United Methodist Church, Clarendon, Texas; South Plains Food Bank of Lubbock, 5605 Martin Luther King Boulevard, Lubbock Texas 79404; the Boys & Girls Clubs of Lubbock, 3221 59th Street, Lubbock, Texas 79413; and the Texas American Civil Liberties Union, P.O. Box 8306, Houston, Texas 77288.

The family of Robin Morris Green created this Life Tributes page to make it easy to share your memories.

Send flowers to the Green family.