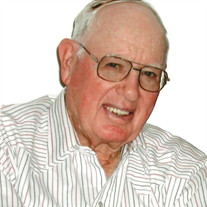 Robert Lee Clark, born December 17, 1919 in Paradise, Texas, passed away on August 30, 2020 at the age of 100. Services will be 1:00 PM Saturday, September 5, 2020 in the First Baptist Church in Memphis with Rev. Daniel Downey and Keith Clark, officiating. Burial will follow in Lakeview Cemetery in Lakeview. Viewing will be held from 9:30 AM- 11:30 AM Saturday at the funeral home. Arrangements are by Robertson Funeral Directors of Memphis. The family moved to Hall County, TX when he was a child. He grew up near Lesley, TX and went to Lesley school, then graduated from High School in Lakeview, TX. He and his siblings enjoyed riding horses all over the Caprock Canyons. During the Depression Era, he joined the Civilian Conservation Corps in Northern New Mexico. When WWII started, he entered the U.S. Army on May 1, 1942 as a Cpl. in the 21st infantry, 24th Division for the duration of the war. At the beginning of the war, he trained in an Intelligence & Reconnaissance Platoon as an Army Intelligence Scout. He received navigation and additional scouting techniques from the U.S. Navy. He spent many days in the hills of Hawaiian Islands as an observer of planes coming in. Places he served in the Asiatic Pacific Theatre: Hawaii, Australia, Philippines (Mindanao, Leyte, Mindoro), and New Guinea, and was honorably discharged on November 22, 1945. After 1945, he came back to Hall County, Texas, and was a farmer and rancher. He served for a few years as president of Hall County American Legion and was a member for more than fifty years. He also served as president of the Hall County Farm Bureau. He was active in the Boy Scouts with his two sons; and passed all requirements to be in the Order of the Arrow. He enjoyed and loved his children, grandchildren, and great grandchildren, along with going fishing, camping, being outdoors, and telling stories of all his growing up years. He always had a positive attitude, even when times were tough, a wonderful role model for everyone. He was preceded in death by his son, Daniel Lee Clark; his parents, Robert Newton Clark and Mona Read Clark; two sisters, Mary Etta Crabtree and Eva Lena Kinnard; four brothers, J.W. Clark, Quilla Newton Clark, Arthur Clark, and William Oliver Clark. He is survived by his wife, Susan Rebecca Moss Clark. They were married 72 years. one son, Gaylon Clark and wife Connie of Lockney, TX; two daughters, Susan Havins and husband Jerry of Ft. Worth, TX, and Holly Taylor and husband Floyd of Memphis, TX; He has 4 grandchildren, Retired U.S.A.F Keith Lee Clark and wife Lori, Angela Susan Taylor and husband, Brian, Teresa Havins Wolgamott and husband Paul, Janice Havins Hise and husband Jason; plus eleven great-grandchildren.

The family of Robert Lee Clark created this Life Tributes page to make it easy to share your memories.

Send flowers to the Clark family.