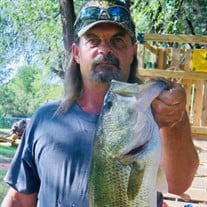 Robert Owen "Bobby" Miles, 61, of Wheeler died Monday, April 19, 2021. Graveside services will be 3:00 PM Friday, April 23, 2021 in Wheeler Cemetery in Wheeler. Arrangements are by Robertson Funeral Directors of Wheeler. Bobby was born February 28, 1960 in Wheeler to Roland and Shirley Miller Miles. He married Linda Swart on April 10, 2009. He had been a resident of Amarillo and Wheeler most of his life, and worked for Texas Department of Transportation. Bobby loved the outdoors. especially fishing, shooting, camping, and boating. He also enjoyed playing darts, jamming to rock n roll and country music, and drinking beer with his son. He was preceded in death by his grandparents. He is survived by his wife, Linda Miles of Wheeler; his parents, Roland and Shirley Miles of Wheeler; his son, Jonathan Miles and wife Terralyn of Wheeler; his step children, Sylvia Boydstun of Denton, Kimberly Boydstun of Amarillo, Lynn Boydstun of Amarillo. Chuck Scott of Phoenix, Arizona, Carrie Scott of Phoenix, Arizona, and Charline Reynoso and husband Jonathan of Phoenix, Arizona; his sister, Melissa Miles of Dallas; 15 grandchildren including his grandson, J.D. Miles; and a great grandchild.

The family of Robert "Bobby" Owen Miles created this Life Tributes page to make it easy to share your memories.

Send flowers to the Miles family.