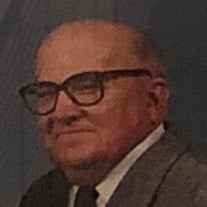 Robert Newton Barron, 98, of Austin, Texas, died Tuesday, June 29, 2021, in Austin. Graveside services with military honors are scheduled for Tuesday, July 6, 2021, at 2:00 PM in Hillcrest Cemetery in McLean, Texas, with Rev. Thacker Haynes officiating. Arrangements are by Robertson Funeral Directors of McLean. Robert Newton Barron (also known as Bob) was born on May 7, 1923, in Oklahoma City where he also grew up. His parents, Charles Elbert Barron and Dessa Caroline Barron, owned a local neighborhood grocery store on Southwest 31st street. Growing up, Bob worked many hours at the family grocery store after school and on weekends. In September 1940, Bob started college at University of Oklahoma. In March 1944, Bob went into the Navy. In the Navy, Robert served as Assistant Deck Officer on the Destroyer USS Philip (DD-498). On the Pacific front during March 1944, Bob participated in the Philippines campaign, where he actively engaged enemy planes, ships and land emplacements. Robert was honorably discharged from the Navy in August 1945. He returned to college and graduated with a Chemical Engineering degree in 1946. After getting his degree, Bob went to work for American Oil Company (AMOCO) in Texas City, Texas. He worked as a Chemical Engineer for AMOCO (mainly at the Texas City refinery) for 44 years. At times, Bob would assist with the startup, shutdowns, and ongoing operations. He was supervisor in charge of the refinery test lab during the last several years. At age 67, Bob retired. Bob met his future wife, Billie Marie Stewart, in Oklahoma City, where she was working as a secretary. Billie was raised on a farm in McLean, Texas. Bob and Billie were married in the home of her parents’ friend in McLean, Texas. Bob commuted to college in Norman, Oklahoma, while Billie stayed in an apartment in Oklahoma City and continued working. While working for AMOCO, Bob and Billie initially lived in Galveston, Texas. They rented an upstairs apartment for 1.5 years. They later rented a house from Paul and Lore May, with whom they became lifelong friends. In 1954, they moved to La Marque, Texas, and bought a 2- bedroom home which was closer to work and near a local high school. Their 3 boys (Robert, Eddie and Mark) spent many hours playing in the large backyard and riding bikes on the school’s sidewalks. Bob was very involved in his sons’ lives. He spent many hours taking the boys to baseball practice and attending their games. Bob was on several Boy Scout committees, assisting the troop and making sure each son completed the highest achievement of Eagle Scout. In 1966, Bob and Billie moved to a larger home in La Marque. Bob spent quality time teaching each son basic mechanic skills for taking care of a house and a car. He brush painted an old Chevy truck bright orange to make the vehicle highly visible to other drivers while his sons were learning how to drive. Bob was instrumental in ensuring each son went to college. In 1984, Bob and Billie bought a home in Austin, Texas, to be closer to grandkids. Bob continued to work in Texas City and drove to and from La Marque to Austin on weekends until he retired. In Austin, Bob continued to show support for his grandkids by attending softball and school activities. As Bob got older, Mark, Brenda, and the grandkids in Austin helped “Pa” with his medical and household activities. He later moved in with Mark and Brenda as home care needs increased. As his daughter in-law said, “He was an excellent example of a family man. He walked the talk of his beliefs… A man of little words, but busy keeping himself sharp. In regards to family, Bob was full of loving kindness.” Bob was admired for his discipline in creating routines that kept him productive and sharp. He loved following businesses and stock reports on the internet and would always give good advice on health and stocks when asked. Robert is preceded in death by his father, Charles Elbert Barron in 1949; mother, Dessa Caroline Barron in 1955; older brother, Charles Eugene Barron who died in a B29 crash in Pacific in May 1945; wife, Billie Marie (Stewart) Barron in 1997; and son, Robert Eugene Barron in 2018. He is survived by two sons, Eddie Truitt Barron and wife Susan of Amarillo, and Mark Keith Barron and wife Brenda of Austin; 9 grandchildren, Robert, Diane, Craig, Jason, Janna, Ollie, Dessie, Laura, and Maggie; and 17 great-grandchildren.

The family of Robert Newton Barron created this Life Tributes page to make it easy to share your memories.

Send flowers to the Barron family.