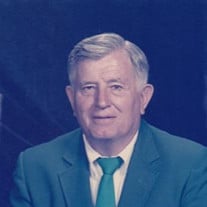 Robert Joseph Adams, 85, of Shamrock died Sunday, March 8, 2020 in Wheeler. Services will be 2:00 PM Thursday, March 12, 2020 in the First United Methodist Church in Shamrock. Burial will follow in Shamrock Cemetery in Shamrock. Visitation will be from 5:00-7:00 PM Wednesday at the funeral home. Arrangements are by Robertson Funeral Directors of Shamrock. Robert was born August 23, 1934 in Amarillo to Marshall Joseph and Ruby Fay McCasland Adams. He had been a lifetime resident of Shamrock and was the first to receive a college scholarship to play golf. He graduated from Tarleton State and had served in the National Guard for several years. After graduating from college, he returned home to work in the family business in Shamrock at Adams Hardware. He took over the family business in 1979 and had owned the store until 2006 when he retired. Robert was heavily involved in the community and had a heart to serve his community. Robert was a member of the Sheriff Posse, former member of the Shamrock Country Club, former member of the Kiwanis Club, and worked with Boy Scouts. Robert had served on the Shamrock Chamber of Commerce from 1959-1998 and was named outstanding citizen by the Chamber in 1985. He had also served on the St. Patrick's Association where he was chairman in 1975 and was the parade marshall in 2006 and 2013 respectively. Robert was one of the oldest members of the First United Methodist Church and worked with Awanis in the First Baptist Church. He married Sandra Braxton on October 3, 1991 in Shamrock. Robert's hobbies include golfing, fishing, horse riding, working cattle, and hunting birds, elk, and deer. He loved his Lord, family, home, and community. He was preceded in death by his parents; a son in law, Craig Yockey; a brother and sister in law, Michael Adams and wife Kathi; a grandchild, Robin Hill; and two great grandchildren, Titus Simikian and Sadie Elliott. Survivors include his wife Sandra Adams of Shamrock; five daughters, Judith Yockey of Coleman, Rene Feddes and husband Michael of Richmond, Kentucky, Kathryn George and husband Sam of Wray, Colorado, Debra Elliott of Shamrock, and Katherine Simikian and husband Koko of Shamrock; a brother, David Adams and wife Gail of Dallas; a step brother, Billy Jack Gibson of Vidor; 14 grandchildren; 20 great grandchildren; and two great great grandchildren. The family request memorials be sent to BSA Hospice of the Southwest or Shamrock Meals on Wheels.

The family of Robert Joseph Adams created this Life Tributes page to make it easy to share your memories.

Send flowers to the Adams family.