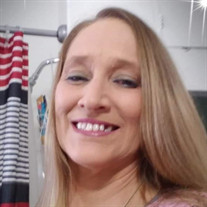 Richelle Elizabeth Pierce, 50, of Hedley died Saturday, January 23, 2021. Memorial Graveside services will be 2:00 PM Tuesday, February 2, 2021 in Rowe Cemetery in Hedley. Viewing will be held from 3:00-6:00 PM Tuesday, January 26, 2021 at the funeral home. Cremation & Arrangements are by Robertson Funeral Directors of Clarendon. Richelle was born September 20, 1970 in Ulysses, Kansas to James Robert and Doris Scott Hill. She graduated from Pampa High School in 1989 where she was on the swim team and advanced to state. She loved her dogs, swimming, making gift baskets, floral arrangements, and working in her yard. She married Billy Joe Pierce on June 13, 2012 in Pampa and had been a resident of Hedley since 2014. She was preceded in death by her parents; her brothers, Raymond, Ronnie, and Robbie Hill; and her sisters, Robin Manzanares and Rene Hill. Survivors include her husband, Billy Pierce of Hedley; her step sons, Clent and Dillon Pierce both of Hedley; her step daughter, Lacey Pierce; her brothers, Randy Hill and Richie Hill both of Pampa; her sisters, Rhonda Hill and Renita Logan both of Pampa, and Rhea Oeser of Muskogee, Oklahoma; and numerous nieces and nephews.

The family of Richelle Elizabeth Pierce created this Life Tributes page to make it easy to share your memories.

Send flowers to the Pierce family.