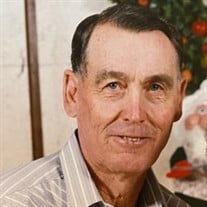 Richard Lee Gaines, 91, of Wheeler died Thursday, October 21, 2021, in Wheeler. Services will be 2:00 PM Tuesday, October 26, 2021, in the First Baptist Church in Wheeler with Rev. Rodney Weatherly and Rev. Larry Mitchell, officiating. Burial will follow in Wheeler Cemetery in Wheeler. Viewing will be held on Monday at the funeral home. Arrangements are by Robertson Funeral Directors of Wheeler. Richard was born September 15, 1930, in Wheeler to Cleo Columbus and Nora Louise Richards Gaines. He married Dixie Laura Sanders on August 31, 1957, in Pampa. Richard was a US Army veteran serving during the Korean War. He had been a lifetime resident of Wheeler, where he was a teacher for 34 years. He was a coach for 20 years of his teaching career, at Wheeler ISD. He also was a farmer and rancher. After retirement from the school, Richard was an avid Wheeler Mustang fan as well as the Wheeler Colts. He enjoyed the outdoors and spending time with his family. Richard was a member of the First Baptist Church in Wheeler. He was preceded in death by his parents; his wife on August 15, 2009; a son, Kent Gaines; and a grandson, Bryan DeMoss. Survivors include his son, Darrell Gaines and wife Sue of Wheeler; his daughters, Vicki Gurley and husband Davy of Perryton and Lynette DeMoss and husband Brett of Brownwood; 10 grandchildren; and 11 great grandchildren; a brother, James Gaines and wife Glenda of Amarillo; a sister, Sue Perkins of Sunray; and numerous nieces and nephews. The family request memorials be sent to Wheeler County Retired Teachers Association PO Box 1102 Wheeler, Texas 79096, or Hemphill County Hospice.

The family of Richard Lee Gaines created this Life Tributes page to make it easy to share your memories.

Send flowers to the Gaines family.