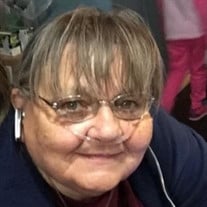 Rebecca Ann Blackburn, 66, of Wheeler died Sunday, November 22, 2020 in Amarillo. Services will be 2:00 PM Wednesday, November 25, 2020 in Cornerstone Church in Wheeler. Burial will follow in Wheeler Cemetery. Arrangements are by Robertson Funeral Directors of Wheeler. Rebecca was born April 11, 1954 in Clovis to Eugene and Bessie Riley Scales. She married Bobby Blackburn on January 17, 1975 in Portales, New Mexico. She had been a resident of Wheeler since 2001 and was a LVN for over 20 years prior to her retirement. She loved spending time with her grandkids and enjoyed her family time, especially with her sister J.R. She also loved to cook and being outdoors. She was preceded in death by her parents; her husband in 2006; and a grandson, Byron Scales. Survivors include her sons, Brad Blackburn of Morton, Mississippi, Mark Blackburn of Keyes, OK, Gary Blackburn of Spearman, Vance Callaway of Amarillo, and Bobby Blackburn of Kelton; her daughters, Mary Blackburn of Wheeler and Tonya Douglas of Amarillo; her sisters, Bessie "J.R." Scales and Jean Scales both of Wheeler; her brother, Billy Scales and wife Janice of Wheeler; She was a Mawmaw to her 23 grandchildren and 10 great grandchildren; her special nieces and nephews, Lee Klonoski, Will Scales, Melisa Scales, Chase Scales, and several other nieces and nephews.

The family of Rebecca Ann Blackburn created this Life Tributes page to make it easy to share your memories.

Send flowers to the Blackburn family.