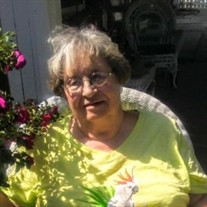 Peggy LaVerne Cockerham, 84, of Howardwick died Monday, March 7, 2022, at her home. Funeral services will be 2:00 PM Monday, March 14, 2022, at Howardwick First Baptist Church, with Pastor Jim Fox, officiating. Burial will follow in Citizens Cemetery. Viewing will be held Sunday, March 13, 2022, from 1:00 – 6:00 PM at the funeral home with family receiving friends from 4:00-6:00 PM. Arrangements are by Robertson Funeral Directors of Clarendon. Peggy LaVerne (McCracken) Cockerham was born on April 28, 1937, in Clarendon, Texas, to George Pinkney and Molly Marie Reynolds McCracken. She married Jimmie Delano Cockerham on June 18, 1953, in Tucumcari, NM. Peggy was an Air Force wife for twenty years which led her to raise her four children by herself while her husband was deployed overseas. Her husband’s career led them to move all over the country. Peggy received her LVN degree in 1967, and later became a registered nurse in 1991. She was the first graduate of an osteopathic nursing school to be licensed in South Carolina. After moving back to Clarendon in 1976 and later to Howardwick in 1983, Peggy became the Assistant Director of Nursing at the Clarendon Nursing Home in 1977. Later, she was promoted as the Director of Nursing until she retired in the late 90’s. Despite retirement, Peggy remained very busy. She actively volunteered in the Howardwick community, was a leader in the Texas Panhandle Alzheimer’s Association, and was a member of the First Baptist Church in Howardwick. Peggy enjoyed being a member of the Red Hats Club and was also a Girl Scout Leader. Peggy instilled a love of reading into her children, and she shared this love with others as a Friend of the Burton Memorial Library. Peggy also wrote a weekly column in the newspaper known as “’wick Picks”. Peggy loved taking her family camping, and her children will always cherish the many memories they made on these trips. Peggy enjoyed quilting, sewing, and crafting. Above all, Peggy loved her family. She was preceded in death by her parents; husband, Jim Cockerham; 3 brothers, Ronald Franklin McCracken, Bobby Lee McCracken, and Georgie Dale McCracken; and her sister, Patsy Lavonia McCracken Cox. Survivors include her son, Gary Cockerham and wife, Candy, of Clarendon; 3 daughters, Cindy Pharris and husband, Ronnie, of Clarendon, Lori Allen of Amarillo, and Colleen Fross of Howardwick; 9 grandchildren; 16 great grandchildren; several cousins, and by Buffy The Wonder Dog. The family request memorials be sent to Donley County Senior Citizens, Drawer B, Clarendon, Texas 79226.

The family of Peggy LaVerne Cockerham created this Life Tributes page to make it easy to share your memories.

Send flowers to the Cockerham family.