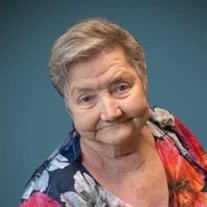 Patsy Earline Havens, 75, passed away peacefully in her sleep on February 18, 2022, in Liberal, KS after a long battle with kidney disease. Patsy was the first child born to Freddie Lawrence Hutson and Ollie Ruth (Fowler) on January 2, 1947 in Borger, Texas. She attended schools in Lelia Lake and Clarendon and lived most of her life in Donley County. Patsy married the love of her life, Milton Lee Havens, on June 5, 1964 in Clarendon, Tx. They were married just short of 42 years before Milton passed away in May of 2005. Three children were born of this union: Preston, Regina, and John. Patsy loved working alongside Milton in their lawn care business. She had an avid love and knowledge for flowers and old cars. She could identify any older car you would pass on the highway. Patsy worked as a waitress at various restaurants in Clarendon. She was involved in the Red Hat Society and the Rebekah Lodge in her later years, and enjoyed many friendships through those clubs. Patsy was preceded in death by her parents, Fred and Ruth Hutson, her husband Milton, brother Jimmy Hutson, brother-in-law Gus Havens, sisters-in-law Connie Havens and Lois Hutson, and great-grandson, Rip Maverick Gaillard. Patsy is survived by her children, Preston Havens of Clarendon, Regina Gaillard and husband Steve, of Texhoma, OK, and John Havens and wife Brandi of Clarendon. She had 7 grandchildren: Amanda Stephan, Lane Gaillard (Corrine), Will Gaillard, Shayla Gaillard, Payton Havens, Calder Havens, and Addison Havens, and brother Shorty Hutson, brother in law Bob Havens and sister in law Lois Havens, as well as several cousins, nieces and nephews. Viewing will be at Robertson Funeral Directors in Clarendon, Texas on Monday, February 21, from 8-9 AM, followed by graveside services at Citizens Cemetery in Clarendon at 10 AM. Memorials may be made to Donley County Senior Citizen Center, 115 E. 114th St, Clarendon, TX 79226.

Patsy Earline Havens, 75, passed away peacefully in her sleep on February 18, 2022, in Liberal, KS after a long battle with kidney disease. Patsy was the first child born to Freddie Lawrence Hutson and Ollie Ruth (Fowler) on January 2, 1947... View Obituary & Service Information

The family of Patsy Earline Havens created this Life Tributes page to make it easy to share your memories.

Patsy Earline Havens, 75, passed away peacefully in her sleep...

Send flowers to the Havens family.