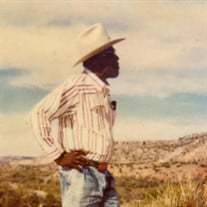 Orsbain Perkins passed away on Sunday, October 3, 2021, at the age of 87. After several months of declining health, Mr. Perkins died peacefully with his beloved wife Judy and family by his side. Mr. Perkins was born on February 3, 1934 in Shaqualak, Mississippi, to father Chester Perkins and mother Elizabeth Hawkins Perkins, and was born fourth of six siblings. He was a member and retired from the Laborers International Union of North America in San Francisco, California before relocating to Clarendon, Texas in 1992. He met his wife Judy Calloway Perkins through a mutual friend and they were married on December 1, 1993. Mr. Perkins had eight children of his own by two previous marriages and gained three bonus children and a son-in-law by marriage. The Perkins also had a special friend who became a daughter to them. Mr. and Mrs. Perkins resided in Clarendon, Texas throughout their married life. Shortly after moving to Clarendon, Mr. Perkins and his longtime friend Clifford Alexander hung out at his wrecking yard, south of town selling parts and doing mechanic work for a few years. Then after, Mary Vorheis introduced him to Annie Roach. He worked for Mr. and Mrs. Roach for a few years up until he got them all settled into their new home in Amarillo, Texas. Annie always admired how he kept Perkins Place looking like a little piece of paradise with the beautiful flowers planted by Mrs. Perkins. Mr. Perkins was well known by a few different nicknames: Bain, Perkins and Perk. In his spare time, Mr. Perkins loved being home and outdoors, repairing and taking things apart and rebuilding them, entertaining his company while drinking Budweiser and Coors, his dogs and he mostly loved to give everyone a hard time, with his jokingly sense of humor. If you talk to anyone from his bank, Donley County State Bank, they can tell you stories, especially Ms. Hall. Before his health started failing him about three years ago, Mr. Perkins and his dog Charlie would fly to visit seven of his children and grandchildren in California. Mr. Perkins was preceded in death by his parents, his sister and brothers and his special daughter Vontina Williams Brace. He was a favorite to his grandchildren, cousins, nieces, nephews, sisters-in-law’s and brothers-in-law’s. He loved and adored his two aunts, Harriet "Ruby" Turner and Ruth "Teena" Hudson of Chicago, Illinois. Written by his wife, Judy Perkins: Mr. Orsbain Perkins lived a life full of joy and laughter. His health started to decline drastically in August 2021. I thank our sovereign lord Jehovah and his son Jesus Christ for supplying the strength to my will and desire that I had to care for Orsbain during his illness. My sister Vanessa and my daughter Kim was there with us during the last week of his life. As of Sunday, October 3, 2021 at 8:28 A.M. my husband took his last breath. At that time, he joined millions waiting to hear Jesus call their name when their lives will be restored. In the bible at John 5:28, 29 it reads, "for the hour is coming in which all those in the memorial tombs will hear (Jesus) voice and come out." At that time their health will be fully restored. The family held a private celebration of Mr. Perkins’ life on October 3, 2021. Mrs. Judy Perkins would like to personally express her heartfelt gratitude for your expression of love, prayers, kind words and support during this difficult time.

Orsbain Perkins passed away on Sunday, October 3, 2021, at the age of 87. After several months of declining health, Mr. Perkins died peacefully with his beloved wife Judy and family by his side. Mr. Perkins was born on February 3, 1934 in... View Obituary & Service Information

The family of Orsbain Perkins created this Life Tributes page to make it easy to share your memories.

Send flowers to the Perkins family.