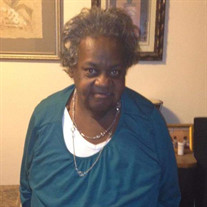 Naomi Ruth Baldwin, 67, of Amarillo died Thursday, April 28, 2022 in Amarillo. Services will be 11:00 AM Friday, May 6, 2022 in Robertson Funeral Directors Heritage Chapel in Memphis with Richard Riles, officiating. Cremation will follow after the service. Inurnment will be at a later date in Fairview Cemetery in Memphis. Viewing will be held Thursday, May 5, 2022 at the funeral home. Arrangements are by Roberts and Funeral Directors of Memphis. Naomi was born August 22, 1954 in Honey Grove, Texas to Clarence and Marie Roberson Baldwin. She grew up in Memphis and later moved to Fresno California and returned back to Texas when she was 25. She was a CNA prior to her retirement. She loved watching the country music channel, wrestling, and loved her grandkids dearly. She was preceded in death by her parents, Clarence and Marie Baldwin; her siblings, Thomas Baldwin, Clarence Frederick Baldwin and Betty Jones, James Baldwin, Vernon Baldwin, Calvin Baldwin, and Eddie Eugene Baldwin, Mary Finley, and Dorothy Laney and her husband AJ. Those left to cherish her memory are her daughter, Ruby Steele and son-in-law Andre Steele; her grandkids, Rashad Steptoe, Xiana Steele, Kedric Steele, Ashton Steele, and Mersadie Graves-Steele; a great grandchild, Keyarah Faye Steptoe; her siblings, Larry Baldwin and wife Judy, Thelma Joe Baldwin, and Cora Therlece Baldwin; a sister in love, Dorothy Williams. and a host of nieces and nephews she loved dearly.

Naomi Ruth Baldwin, 67, of Amarillo died Thursday, April 28, 2022 in Amarillo. Services will be 11:00 AM Friday, May 6, 2022 in Robertson Funeral Directors Heritage Chapel in Memphis with Richard Riles, officiating. Cremation will follow after... View Obituary & Service Information

The family of Naomi Ruth Baldwin created this Life Tributes page to make it easy to share your memories.

Send flowers to the Baldwin family.