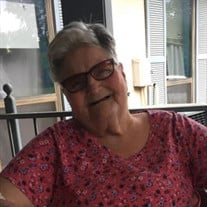 Viewing will be Friday, January 7, 2022 at Robertson Funeral Director in Wheeler from 9:00AM to 12:00PM. Graveside service will be held on Friday, January 7, 2022 in the Wheeler cemetery at 2:00PM. On January 1, 2022, Monta Faye Watts Boyd left the pain of this life behind and walked into the arms of Jesus. HE “ Whispered Welcome Home good and faithful Servant”, and, we’re sure that Monta’s two sons, Russell and William, were waiting for their turn saying “Mama! We’ve waited so long to see you!” MAMA---A word Monta Faye had truly craved to hear for over 60 years. She was born on April 12, 1937, to Richard Albert and Annie Mae Hart Watts while the family was living on the Davis Ranch East of Wheeler, Tx. Monta was the youngest but equally intelligent and very creative---having a brilliant mechanical mind and ALWAYS sharing her God given talents and gifts with others. Many verses in Proverbs 31 is speaking of Monta Faye. While still in High School, Monta sewed a skirt and blouse for her oldest niece in order to receive a good grade in Home Economics Class. She Graduated from Kelton High School, got married, and displayed her strong work ethic on the farm she and her husband Hershell owned. Later one niece remembers watching Monta Faye measure a neighbor and then sewed her a skirt, blouse and fitted jacket without a pattern. Another niece and all her siblings received two sets of clothes each from Monta Faye one summer when their parents couldn’t afford them. Cooking and baking were also high on Monta Faye’s list of favorite things. When he was little, one nephew remembers that anyone can make a bologna sandwich, but Monta Faye made bologna salad sandwiches, which to him were better than sliced bread. As Monta Faye was working at a Convenience store, a great nephew renamed her “Good Faye” after she would buy him a treat upon every visit. After awhile, Monta Faye became a truck diver which was a very hard job, but she enjoyed traveling all over the United States always keeping a crochet project close by. She was a very talented Artist as well and once while she was in between hauls with her truck, she stayed with a niece and painted a project with a tooth pick. In mid-life, Monta went to College, learned a lot of long medical words and graduated with an “A” average. She worked as a Lab Technician at the V A Hospital in Amarillo until her retirement. Then she became a self taught Computer Whiz and ALWAYS had a pet to love. After inheriting a love for gardening, Monta Faye was ALWAYS growing something, She would either can, freeze, share or sell any extra vegetables. Later in life she would scratch the ground a bit, scatter some flower seeds and have a lush flower bed. Was she perfect? Absolutely NOT! She was a sinner saved by God’s loving Grace—exactly what she hoped for each of her family members and friends. Thanks be to a LIVING GOD who adores those people who are about His business at this season of life. The best yet to come! The family members preceding her in death her parents, her siblings: Julian Weldon Watts, Elmeds Bell Elder, Edwin Wattts, Richard Albert Watts Jr. Virginia Dell Patterson, Garland Gene Watts, and her babies Russell Erwin April 10, 1957-April 12, 1957 and William Lane February 21, 1959-February 21, 1959. Also, 3 nephews Bobby Watts, Roger Patterson and Lloyd Elder and one niece, Shelley Campbell. Survivors include a brother Kenneth Dale Watts and numerous nieces & nephews. Memorials can be sent to the Kidney Foundation or your local Animal Shelter.

The family of Monta Faye Boyd created this Life Tributes page to make it easy to share your memories.

Send flowers to the Boyd family.