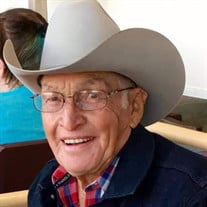 Mike Lee Smith, 89, of Clarendon, TX passed July 21, 2021. He was born in Donley County to Paul and Francis Smith on October 28, 1931. He grew up on the family farm East of Clarendon with three brothers and two sisters. After graduating Clarendon High School, he joined the Navy and served during the Korean War. After his service, he returned home and entered Clarendon College, then transferred on to West Texas State University. During that time, he met the love of his life, Margaret Gayle Cushing and they were wed August 22, 1959. Two years later, after a brief time in Borger, Texas, they returned to the area they loved and moved onto the Cushing Ranch in Briscoe and Hall counties where he worked, owned and lived until the day he died. During these years, he served many of them on the Clarendon Outdoor Entertainment Association board and was a member of the Silverton United Methodist Church. He was pre-deceased by his parents; his wife, Margaret; brothers, Harold, Joe, and Jimmie Smith; nephews, Joe & Kim Smith, Mike Nelson, and Jeff Tyra; and numerous close friends. He is survived by sons, Bill Smith and wife DeLane of Silverton, and Lee Smith of Clarendon; granddaughters, Ashley, Shayna, and Samantha Smith; sisters, Barbara Nelson of Wichita, KS, and Janie Tyra and husband Ronnie of Amarillo, TX; and numerous other nieces, nephews, great nieces and nephews, great-great nieces and nephews, as well as many many good friends. Visitation at Robertson Funeral Home in Clarendon will be from 5:00-6:00 PM, Sunday, July 25th. Services will be held Monday, July 26th at United Methodist Church in Silverton, Texas, at 10:00 AM. The family asks for donations to your local or closest Volunteer Fire Department or volunteer EMS in lieu of flowers.

Mike Lee Smith, 89, of Clarendon, TX passed July 21, 2021. He was born in Donley County to Paul and Francis Smith on October 28, 1931. He grew up on the family farm East of Clarendon with three brothers and two sisters. After graduating Clarendon... View Obituary & Service Information

The family of Mike Lee Smith created this Life Tributes page to make it easy to share your memories.

Send flowers to the Smith family.