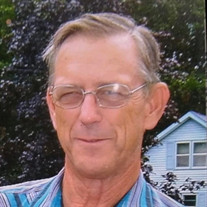 Michael Lawrence "Mike" Nicholson, 76, of McLean died Tuesday, May 19, 2020 in McLean. Graveside Services will be at 11:00 AM Saturday, May 23, 2020 in Hillcrest Cemetery in McLean with Rev. Thacker Haynes, officiating.. If attending the service, please be prepared to maintain social distancing practices. Arrangements are by Robertson Funeral Directors of McLean. Mike was born December 17, 1943 in McLean. He grew up in McLean and was a 1962 graduate of McLean High School. Mike worked as a deputy sheriff for Amarillo, Memphis, and Shamrock as well as several other towns. He was an ordained minister for the Methodist Church while living in Michigan and served 12 years before he retired from ministry. While a minister, he attended mortuary school at Ferris State University and then Wayne State University in Michigan. Upon graduation he then purchased the funeral home in Idlewild, Michigan where he owned the funeral home for several years and then worked as a funeral Director in Scottville, Michigan. When he moved back to McLean in 2001, he worked as a funeral assistant for Bailey-Ware Funeral Home and Robertson Funeral Directors for several years. He enjoyed traveling and his favorite hobby was being a HAM radio operator. He also loved caring for rescued dogs. He was a member of the Heald Methodist Church. Survivors include his wife, Sandy Russell of McLean; four sons, James Madlock and wife Mel of Missouri, Mike Nicholson, Jr. and wife Ruthann of Michigan, Jimmy Dale Nicholson of Michigan, and Vernon Nicholson of Lefors; a daughter, Lynette Dancz and husband Dayna of Michigan; two step daughters, Tabitha Stone of Delaware, and Charity Miller of Georgia; a brother, Gary Nicholson and wife Sherry of Michigan; his father in law, Stanley Yorks of McLean; numerous grandchildren, and great grandchildren; several nieces and nephews. He was preceded in death by his parents; a son, Kenneth Ray Vick; and 3 brothers, Nick, Hershel, and David; and a wife, Aleah Nicholson.

Michael Lawrence "Mike" Nicholson, 76, of McLean died Tuesday, May 19, 2020 in McLean. Graveside Services will be at 11:00 AM Saturday, May 23, 2020 in Hillcrest Cemetery in McLean with Rev. Thacker Haynes, officiating.. If attending the service,... View Obituary & Service Information

The family of Michael "Mike" Lawrence Nicholson created this Life Tributes page to make it easy to share your memories.

Send flowers to the Nicholson family.