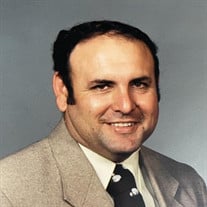 Michael Shayne Branigan, 75, of Memphis died Friday, November 5, 2021 in Amarillo. Graveside services will be 2:00 PM Friday, November 12, 2021 in Fairview Cemetery in Memphis. Memorial services will be 3:00 PM Friday, November 12, 2021 in the First United Methodist Church in Memphis. Viewing will be held Thursday at the funeral home. Arrangements are by Robertson Funeral Directors of Memphis. Michael Shayne Branigan, 75, was born October 31, 1946 to Elmont Branigan and Florita Salazar Branigan in Memphis, Texas. Mike attended Memphis schools, graduated in 1965, met Linda Carol Miller January 1963 was engaged in 1964 and married July 2, 1966. Mike and Linda lived in Oklahoma City where he attended HC Lewis School of Electronics and was employed with J.C. Penney’s. They moved to Granbury where Mike worked for General Dynamics in 1968. In 1969 Michelle was born, shortly thereafter they moved back to Memphis where Mike began his jewelry manufacturing courses in 1972. In 1973 Michael Shayne II was born. Mike worked using his talent to manufacture several unique, personalized designs of jewelry for many people. He also repaired antique clocks. In the late 70’s he took on the position as city manager. During his tenure, several streets were paved and city drainage and sanitation was planned and completed. In 1982, following the loss of his father Elmont, Mike began a long career in the medical field as an EMT, Paramedic, then earned his BSN with honors in August of 1996. Mike worked as a charge nurse for Hall County Hospital until it was closed. Mike began working as the Infirmary Administrator at the T.L. Roach Jr. Unit for Childress Regional Medical Center in February of 1998 until Mike retired in July 2015. Throughout Mike’s life, he was a lifetime Boy Scout and earned the rank of Eagle Scout. Mike was Lodge Chief in Order of the Arrow as a vigil member of the Lone Wolf Lodge Adobe Walls Council and participated in numerous ceremonies. Mike was Worshipful Master of the Masonic Lodge #729. Mike bought and managed properties at Club Lake where he served as president of the board for several terms. Mike was a lifelong member of the First United Methodist Church, he was a pilot, a scuba diver, motorcycle rider, powerlifter with numerous state and national records in deadlift and bench press. He was also a member of the Memphis Lion’s Club. Mike was a wonderful husband to Linda for over 50 years. They travelled many places together and sometimes included children and grandchildren. His grandchildren fondly remember the trips to Carlsbad Caverns, The Precious Moments Chapel, White Sands, and multiple snow skiing trips. Unfortunately, Linda lost her leg in 2013 and Mike went above and beyond to take excellent care of her until she passed away in 2017. He married Sondra Stargel on January 2nd, 2020. They enjoyed spending time with friends, feeding fish, watching the wildlife, and especially enjoyed the beautiful Texas sunsets while sitting on the deck. Mike passed away surrounded by family at his bedside on November 5th, 2021 after complications from West Nile Virus. Mike was preceded in death by his parents and wife Linda Miller Branigan. Mike is survived by his wife Sondra, sister Elmonette and husband Russell of Clarendon. Daughter Michelle Branigan and soulmate Mark Sweatt of Memphis, son Shayne Branigan and Angie of Memphis, Grandchildren Michaela and Jeremias Torres of Lubbock, Savannah Lee of Lubbock, Jessica Lee of Lubbock, Maddi Bryant of Childress, Hannah and Andrew White of Memphis, Liam Branigan of Memphis, and Abbey Branigan of Memphis, great granddaughter Sierra White of Memphis. Nephew Stephen Bivens and family of Clarendon, and Nephew Scott Bivens and family of Chattanooga, Tenn. In Lieu of flowers the family request donations to be made to First United Methodist Church of Memphis, Tx or the Memphis Lion’s Club.

The family of Michael Shayne Branigan created this Life Tributes page to make it easy to share your memories.

Send flowers to the Branigan family.