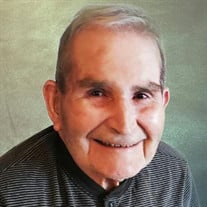 Melvin Lewis Overcast (Chief, Mr. Melvin, Dad, Daddy), age 94 ½, passed away in his home in Washburn, Texas on Saturday, January 2, 2021 in the loving arms of his wife Ruth, his true love. Mr. Overcast was born on a ranch near Elm Creek, SE of Shamrock, Texas to Claude and Anna Overcast as the second child of seven on May 13, 1926. He attended school in Shamrock and then Samnorwood until being drafted into the Army during World War II at the age of 18. Upon returning, he and Ruth were married just a few days later on January 22, 1946. They spent over 75 years together working side-by-side and fully enjoying life. During Melvin’s life, he enjoyed many different careers as well as home locations, mainly in Texas and Missouri. He celebrated his 19th birthday on the front lines in Okinawa while protecting and serving his country, he farmed cotton, he was redrafted by the Army during the Korean War, served four years with the Amarillo Fire Department, ran a Borden’s Milk Truck in the Amarillo/Pantex area, moved to Missouri with his wife and three boys to be dairy farmers, owned a butchering plant, obtained his real estate broker license, was an insurance agent and all around “horse-trader”. After being Honorably Discharged from the Army as a Staff Sergeant, he continued to love and honor his county. His greatest pleasure was serving his Lord and witnessing to others through his acts of caring, serving, and teaching, as well as preaching in small churches in the rural areas. He loved others and always had a sweet smile that would light up a room. At any time, he was ready to play a competitive game of dominoes, whether 42, straight, or shoot the moon. He loved watching John Wayne movies, rodeos, and sports, or just spending time with his family and friends. He will be remembered for his positive outlook, quick wit, and funny comebacks. He is survived by his wife and constant companion, Ruth “Pug” Overcast of Claude/Washburn; son Melvin Dean Overcast and daughter-in-law/42 partner Cindy Overcast of Cassville, Missouri; son Dirk Overcast of Riverton, Wyoming; daughter Susan Overcast of Claude/Washburn, Texas; and his “Charlie” Tim Wilson of Claude/Washburn, Texas. Grandkids include Monte Overcast and family, David Overcast and family, Marcus Overcast, Buckey Overcast and family, Shane Overcast, Jessica Burns, Corry Dean and family, plus great grandkids, great-great grandkids, brothers-in-law, sisters-in-law, nieces, nephews, and many friends who were like family to him. Melvin is preceded in death by his parents, brothers Bill Overcast, Richard Overcast, Ernie Overcast, Lawrence Overcast; sister Thelma Jett, son David Lee Overcast, grandson Lucas Overcast, great-grandson Colton Overcast, plus special nieces, nephews, brothers-in-law and sisters-in-law. During his life, Melvin always wanted to make sure others were taken care of and his family wishes to honor his memory by having a graveside service at 1:00 p.m. on Wednesday, January 6th, 2021 at the Claude Cemetery in Claude, Texas. During the graveside service, please practice safe-distancing and masks are encouraged for the safety of each other. The family will have a Celebration of Life at a later date. The Overcast Family would like to thank all of their family and friends who loved Melvin the way they did. A special thank you to the VA Hospital of Amarillo and the Home-Based Primary Care Team as well as the High Plains Senior Care Hospice team. We have all been blessed by knowing this amazing God-loving gentle giant. In lieu of flowers, please make a donation to: Washburn Community/Fire Department (301 Duncan Street, Claude, TX 79019), First Baptist Church of Claude (308 Parks St, Claude, TX 79019) or a charity of your choice.

Melvin Lewis Overcast (Chief, Mr. Melvin, Dad, Daddy), age 94 ½, passed away in his home in Washburn, Texas on Saturday, January 2, 2021 in the loving arms of his wife Ruth, his true love. Mr. Overcast was born on a ranch near Elm Creek, SE... View Obituary & Service Information

The family of Melvin Lewis Overcast created this Life Tributes page to make it easy to share your memories.

Send flowers to the Overcast family.