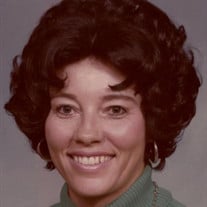 Maxine Talley Robinson, 81 of Clarendon, Texas passed peacefully into the hands of the Lord on December 21, 2020. Maxine was born June 1, 1939 in Ashtola to Wanna Mae and Emery Talley. The eldest of three children, Maxine was ever in the role of caretaker, as well as big sister. While most of her growing up years were in Donley County, where she developed a love of the outdoors, cattle, and animals of all kinds, the family briefly moved to Odessa, where she formed a lifelong bond with her best friend, Bonnie Lewis. This bond of childhood friendship lasted over 70 years until her passing. Maxine was active in the family’s farming and cattle business, with her taking an important role as she and her husband, Don traveled to Canada, California, Arizona, Missouri, and many other destinations throughout the US marketing, showing, and hauling cattle. Ever a person that loved the outdoors, Maxine often helped with the crops as well. Maxine’s love for the Lord is evidenced by her willingness to bring others to Christ. She can be credited with sparking the desire for baptism in many in the community and in her family. Maxine leaves behind a great legacy as each and every one of her children and her grandchildren are followers of Christ. As a Bible school teacher, or one willing to bring food to the sick or bereaved, or readily drive someone to Amarillo for doctor’s visits, Maxine truly had a servant’s heart. Possibly, she will be best known in her family for encouraging her family to study the Bible. As she always said, the Lord wants a portion of your time and studying his word every day is the best way. Maxine loved her family and is survived by her husband of 64 years, Don; the couple’s three children, Mona Robinson Oney, Clint (Elaina) Robinson and Lori Robinson. Maxine took great delight in her 6 grandchildren: Michelle (Jimmy) Spradley, Sarah (Dustin) Clark, Heather (Martin) Oliver, Alexa (Jeremy) Leech, Michael (Kylie) Hall, and Samantha Jarpe. A source of pride and joy for Maxine were her 10 great grandchildren: Camden Spradley, Jayci Clark, Nolan Spradley, Dylan Clark, Shaylee Hall, Madilynn Oliver, Daegan Hall, Ryan Leech, Caleb Oliver and Dawson Hall. Maxine leaves behind many other friends and family members including her sister, Judy Hays and husband Bill. Also her niece Christina George, Christina’s children Aaron and Cassie Childress, and new great niece Vivia. Also, brother in law, Dale Robinson and wife Sue and son Morgan. Maxine is preceded in death by her parents Wanna Mae and Emery Talley, her brother Wendell, her grandmother Beulah Matlock, her mother-in-law Lois Robinson and son-in-law Bruce Oney. Memorials may be made to the Eastern European Mission, PO Box 55245, Hurst, TX 76054, physical address 777 Lonesome Dove Trail Hurst, TX 76054. Their phone #800.486.1818. Their website [email protected] EEM distributes Bibles to Romania, Bulgaria, Greece and the Ukraine.

Maxine Talley Robinson, 81 of Clarendon, Texas passed peacefully into the hands of the Lord on December 21, 2020. Maxine was born June 1, 1939 in Ashtola to Wanna Mae and Emery Talley. The eldest of three children, Maxine was ever in the role... View Obituary & Service Information

The family of Maxine Talley Robinson created this Life Tributes page to make it easy to share your memories.

Send flowers to the Robinson family.