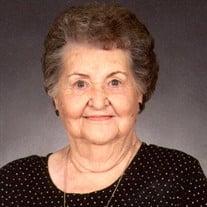 April 2, 2021 Willene took her last breath here on earth and breathed her first breath in Heaven in the presence of her Lord and Savior. Services will be 2:00 PM Tuesday, April 6, 2021 in the Clarendon Church of Christ with Chris Moore, officiating. Burial will follow in Citizens Cemetery in Clarendon. Arrangements are by Robertson Funeral Directors of Clarendon. Willene was born January 10, 1927 to Etta and Joe Burgett in Pauls Valley, Oklahoma. At an early age, the family relocated to Texas, where she attended schools at Samnorwood and Wellington. On November 24, 1942 she married her childhood sweetheart, Oran G. Judd, known to friends and family as John. They were blessed with 2 sons, Glenn and Eddy Wayne. They moved several times, as necessitated by work for John, finally settling in Clarendon, where John went into business for himself. They made their home and raised their sons there. Willene always made herself available to them, and put their needs above her own. John died May 25, 1999 after a long illness where she seldom left his side. They had been married 56 years. In 1967, she attended the John V. London School of Vocational Nursing, after which she found her niche in the geriatric field, and worked the last 20 years before she retired at the Clarendon Nursing Home. She had such a sweet, generous spirit, and always gave her patients the best care possible and loved them as if they were her own family. Nana, she was known by her grandchildren and great-grandchildren, was always involved in their school functions and sports. She was a Clarendon Broncos fan, and rarely missed a game, and found those games even more exciting when her sons, grandsons, or great-grandsons played. She also was a great Dallas Cowboys fan. She was dearly loved by her family and friends, and they were enriched by her devotion to them and to her God. She loved painting and quilting, but most of all she loved her Lord, and scripture, and was always involved in church activities and assisting her church family any way she could. She was a longtime member of the Clarendon Church of Christ, and her presence will be sorely missed. Those she left in the caring hands of God are her son, Glenn and wife Claudette of Georgetown, Texas; her daughter in law, Linda Judd of Clarendon; 9 grandchildren; 20 great grandchildren; 7 great great grandchildren; numerous nieces and nephews, and a host of friends. Those eagerly awaiting her arrival in Heaven are her husband, John; her Mama "Bill" Etta Parrigen; step father, Cult Parrigan; her son, Eddy Judd; her sisters, Dovie and Caroline; and 2 great grandbabies. Our loss is Heaven's gain. In lieu of flowers, Willene requested donations be sent to the Clarendon Church of Christ, Donley County Senior Citizens in Clarendon, or the Citizens Cemetery Association.

April 2, 2021 Willene took her last breath here on earth and breathed her first breath in Heaven in the presence of her Lord and Savior. Services will be 2:00 PM Tuesday, April 6, 2021 in the Clarendon Church of Christ with Chris Moore, officiating.... View Obituary & Service Information

The family of Mary Willene "Nana" Judd created this Life Tributes page to make it easy to share your memories.

Send flowers to the Judd family.