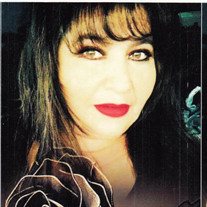 Martina Ruiz Garcia was born in Beeville, TX on January 15, 1956 and left peacefully on July 22, 2020. She was married to Abelardo G. Ruiz on April 27, 1971 for 20 years and had five children. She was composer and song writer and had a home with her music career in Beeville, TX. Then a 2nd home with her children in Shamrock, TX. She has been in the music business since a young girl. However, she went professional after raising her children and in 1993 she recorded her first recording with Hacienda Records out of Corpus Christi, TX. Martina started her band ‘Conjunto La Suerte De Sam Y Martina” later in 1993. Then she married Sam Garcia (Accordionist) in 1995. Then she joined CHR Records and in total recorded 9 professional Country and Tejano Music CDs. She is a Tejano Roots Award Winner as “Female Vocalist of the year of 2013” and inducted in the Tejano Roots Hall of Fame in Alice, TX. In 2016 she was invited to the Tejano Music Awards in San Antonio, TX as a guest of Honor. In 2018 she was a Nominated in 3 different music categories in by the Tejano Music Awards. Martina has done hundreds of beneﬁts as helping others was always close to her heart, for whatever their cause, she used donated her talent. She loved signing anywhere she was invited to. Her two passions were her family and her music. In June 2019 she was diagnosed with Stage 4 Breast Cancer that metastasized to her liver and she became “Martina Strong” bringing awareness of getting annual Mammogram and if pain persists asking about a Nuclear Breast Test as she fell in the 10% of cancer that was not caught by a Mammogram. She is survived by daughter, Sonia (Albert) Alfaro, daughter, Ruth (Joey) Putman, daughter, April (Thomas Jr) Lilly, son Abel (April) Ruiz all of Shamrock, TX. Sister Terry (Darrel) Hicks Kennedy TX, Sister Dora (Ernest) Rincon, Brother Bennie (Alma) Benavidez, Brother George (Lucy) Benavidez, and Sister Consuelo (Annette) Benavidez all of Beeville, TX. Several Aunts and Uncles with numerous cousins, grandchildren, and great grandchildren. She is preceded in death by her son, Robert Castilla, 1st Husband, Abelardo G Ruiz, 2nd Husband, Sam Garcia, her Mother, Guadalupe Tijerina Benavidez. Family Directed Memorial Services will be 1:00 PM Friday, July 24, 2020 in the First Baptist Church in Shamrock. Graveside services will be 2:00 PM Friday, July 24, 2020 in Shamrock Cemetery in Shamrock. Viewing will be held from 10:00 AM-4:00 PM Thursday and 9:00 AM-12:00 PM Friday at the funeral home. Due to the Coronavirus, we are only allowing 5 people to enter the funeral home at a time. If attending the service, please be prepared to maintain social distancing practices. Arrangements are by Robertson Funeral Directors of Shamrock.

Martina Ruiz Garcia was born in Beeville, TX on January 15, 1956 and left peacefully on July 22, 2020. She was married to Abelardo G. Ruiz on April 27, 1971 for 20 years and had five children. She was composer and song writer and had a home... View Obituary & Service Information

The family of Martina Ruiz Garcia created this Life Tributes page to make it easy to share your memories.

Send flowers to the Garcia family.