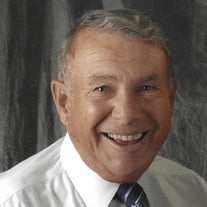 Mac John Stavenhagen, 86, died Friday, January 22, 2021. Graveside services will be held 2:00 PM Tuesday, January 26, 2021 at Rowe Cemetery in Hedley, Texas. Arrangements are by Robertson Funeral Directors of Clarendon. Mac was born May 28, 1934, in Lipan, Texas, to Ira and John Stavenhagen. Mac loved life and lived it well. He enjoyed the outdoors, and he was a great example of the phrase, “You have to work to be happy.” He lived most of his life in Donley County, which he loved greatly. He once said, “There is no more rewarding place to live than a small town.” Mac’s greatest joy came from being around his family, friends and fellow humans. Mac was a natural-born businessman. He held a variety of jobs throughout his life — opening a barbecue restaurant, working as a Borden’s milk distributor — but his greatest success was owning Stavenhagen Furniture & Carpet, where he partnered with his brother, Bill Stavenhagen. They later incorporated Clarendon’s first video rental store into the business. The brothers then moved the video rental into a RadioShack. Mac graduated from Lelia Lake High School in 1952 and later served in the U.S. Army, where he was stationed in Japan. He also attended Amarillo College. On June 2, 1956, he married the love of his life, Jean Bailey. Later in life, Mac cherished his farm, where he raised registered cattle and owned a grand champion bull. An active member of his community, Mac served as an alderman for the City of Clarendon for many years. He was also a member of the Lion’s Club, a member of the First Baptist Church of Clarendon and the Clarendon Merchants Association. He was preceded in his death by his wife Jean; two infant daughters, Lisa Gay and Mitzi Gail; two brothers, Ed, James and wife Virginia; and two sisters, Pearline McCuiston and Earline Strand. Survivors include a son, Steve of Amarillo; two grandchildren, Cody and Casey; two brothers W.G. and wife Liz of Dumas and Bill and wife Annis of Clarendon; a sister-in-law Nita Graham and husband Gary of Memphis; and several nieces and nephews who Mac loved. The family requests memorials be made to the Rowe Cemetery Association in Hedley.

The family of Mac John Stavenhagen created this Life Tributes page to make it easy to share your memories.

Send flowers to the Stavenhagen family.