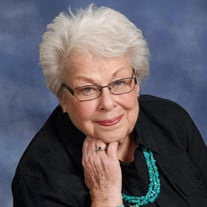 Lynn Reeves, 87, passed away in Amarillo, TX, on November 7, 2020. Private family graveside services will be held in her honor. Arrangements are by Robertson Funeral Directors of McLean. Lynna Dell Mantooth was born May 12, 1933 in Clarendon, TX, to Odell and Tressie Mantooth. Her family moved to McLean when she was an infant where she grew up attending McLean schools. She met her husband Bill Reeves (Billy Ray) at a Teen Town dance. They married on Christmas Eve in 1948 when she was 15 years old and still in high school (Bill had to sign her report cards that last year of school). Together they had 3 children, John, April and James. Bill’s job with the US Postal Service took her all over the country. In 1964, they moved to the San Francisco Bay Area where she experienced culture shock with freeways, suburbs and the Summer of Love. The two then moved to Washington DC area in the late 70’s where she enjoyed taking in all the historical sites and even attended President Reagan’s Inauguration. Upon Bill’s retirement in 1983, they settled in the foothills outside of Reno, NV. In 1991, they had the opportunity to move back to their hometown of McLean where Lynn quickly stepped into her previous life of singing in the Methodist Church Choir and getting involved in community service by serving on McLean City Council and EOC. She also volunteered her time at the Mclean-Alanreed Museum and the Devil’s Rope Museum. She enjoyed antiquing and junking - she was always on the hunt for that special piece. She often didn’t know what it was she was looking for, but new exactly when she found it. Her biggest joy was to be part of her grandkids and great-grandkids lives, as scattered as they are, across the country. After Bill’s passing in 2011, Lynn chose to stay in the place she was most comfortable- the home she shared with Bill and the town where her grand journey began. She was preceded in death by her husband, Bill; and her brother, Ricky Mantooth (Sammye). She is survived by her sister Beth Mantooth Stribling (Gil); Children John Reeves (Annette), April Boarts (Phil) and Jim Reeves (Donna); Grandkids Chastity Stash (Fred), Jason Boarts (Laurie), Ashley Lewis (Ty), April Davis, Chris Boarts (Mary), Amanda Lango (Josh), Matthew Gabbard and Kenny Gabbard; Great Grandkids Meghan Rogers (Mathew), Autumn Andrew (Justin), Abbie Stash, Riley, Chase, Ethan, Colton, Emma and William; Great-Great Grandkids Benjamin, Ellie and Samuel. Special thanks and appreciation for Nita Riemer, Jenny Haynes, David Haynes and Sheri Haynes and their families for their loving care. Memorials may be made to the McLean Methodist Church, the McLean-Alanreed Museum or Devil’s Rope Museum.

Lynn Reeves, 87, passed away in Amarillo, TX, on November 7, 2020. Private family graveside services will be held in her honor. Arrangements are by Robertson Funeral Directors of McLean. Lynna Dell Mantooth was born May 12, 1933 in Clarendon,... View Obituary & Service Information

The family of Lynn Reeves created this Life Tributes page to make it easy to share your memories.

Send flowers to the Reeves family.