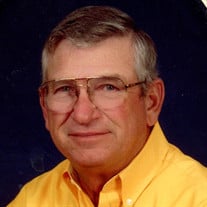 Loyd Dean Messer passed away Thursday morning, August 19. Loyd was born June 19, 1944 in Memphis, Tx. He was raised in Hedley by his parents L.D and Dorothy Messer along with his older brother Roger and younger sister Delores. Loyd enjoyed growing and harvesting peaches around Hedley in his early years farming with his father. He later moved his young family to Morse, Tx. where he owned and ran a fertilizer business. Loyd then moved to Gruver and was employed by Dean Cluck where he took care of much of the farming operations for Dean Cluck Feedyard for many years, he then spent some time in Mountain View, Ok. where he owned and operated a service station, later returning to Gruver for a short time before moving on to Center Point, Tx. helping Monte Cluck again with odd and end jobs and owning his own pecan tree operation in the Hill Country where he finally retired and moved back to Wellington, Tx. close to his old stomping grounds just a short time ago. Loyd was a jack of all trades and would give the shirt off his back to anyone in need. Loyd is preceded in death by his parents, L.D. and Dorothy Messer, his wife Connie Messer and his beloved son, Michael Messer whom he has missed dearly for 30 years. He is survived by his brother Roger and wife Elloise of Memphis, Tx., a sister, Delores Crump of Clarendon, his son Darrell Messer and wife Lori of Gruver, daughter Deana Crump of Clarendon, son Loyd Ray Messer of Bellingham, WA. daughter Ashley Messer of Houston and Lindsay Messer of Anadarko, Ok. Grandchildren, Matt and wife Shanae Messer of Gruver, Miles and Abbi Messer of Gruver, Mike and Julie Crump of Canyon, Chris Crump of Matador and Ethan Puerta of Anadarko. Great grandchildren, Knox Messer, Jack Messer, Hayes Messer, Fletcher Messer, Gray Messer, Scout Messer, Kyndall Crump, Waverley Crump, Keighen Crump and Carter Crump. Many nieces and nephews and many many friends. Loyd trusted Christ and was baptized @ age 10 and became a member of Hedley Baptist Church… he was welcomed home and greeted by his son, Michael and all his many loved ones and friends. Loyd will be greatly missed but can now breathe easy. Graveside services will be at Rowe Cemetery in Hedley @ 1:00 p.m. on Monday, August 23, 2021 with Scott Curry and Scotty Smith, officiating. The family request memorials be sent to Rowe Cemetery Association / PO Box 213 / Hedley, TX 79237.

Loyd Dean Messer passed away Thursday morning, August 19. Loyd was born June 19, 1944 in Memphis, Tx. He was raised in Hedley by his parents L.D and Dorothy Messer along with his older brother Roger and younger sister Delores. Loyd enjoyed... View Obituary & Service Information

The family of Loyd Dean Messer created this Life Tributes page to make it easy to share your memories.

Send flowers to the Messer family.