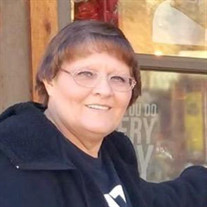 Loretta Fern Watts, 67, of Clarendon died on Thursday, September 16, 2021. Services will be Monday, September 20, 2021 10:00AM in The Robertson Saints’ Roost Chapel, burial to follow in Citizens Cemetery with Joe Neal Shadle officiating. Arrangements are by Robertson Funeral Directors of Clarendon. Fern was born January 19, 1954 in Clarendon, Texas to John Calvin and Billie Kimbrow Ashcraft. She married James Edward Watts on May 7, 1996 in Clarendon. She enjoyed cooking, gardening, music and the outdoors. Family was important to Fern, she loved spending time with her children, grandchildren and great grandchildren very much. Fern was a resident of Donley County most of her life. She was preceded in death by her parents and a daughter Elizabeth Watts. Survivors include her husband, James; son, Jerry Stegall and wife Tammy of Pampa ; daughters, Tammy Christopher and husband Clay of Clarendon, Denita Davis of Clarendon, Jamie Watts and fiancé Jerry Reynolds of Balch Springs, Patty Bell and husband Billy of Honey Grove, and Linda Massey and husband Kenneth of Honey Grove; grandchildren, Caitlyn Burrow and husband Byron of Clarendon, Elizebeth Christopher of Pampa, Lane Stegall, Sonny Stegall and Brittany Stegall all of Lefors, Megan Bowley and husband Geoff of Pampa and Heather Schroder and husband Ben of Lefors and many step grand and great grandchildren. She is also survived by many other family members, her friends at Fresenius Dialysis Center in Amarillo and her special caregivers at Kindred Hospice. In lieu of flowers memorials may be sent to a charity of choice. Family will be gathering at 520 East 4th Street in Clarendon.

The family of Loretta Fern Watts created this Life Tributes page to make it easy to share your memories.

Send flowers to the Watts family.