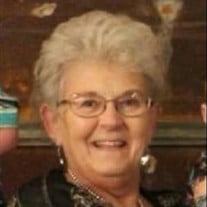 Linda Jolene McDonald, 72, of McLean died Tuesday, March 8, 2022 in Amarillo. Services will be 2:00 PM Saturday, March 12, 2022 in the McLean United Methodist Church with Rev. Thacker Haynes, officiating. Burial will follow in Hillcrest Cemetery in McLean. Viewing will be held Friday, March 11, 2022 at the funeral home. Arrangements are by Robertson Funeral Directors of McLean. Linda was born March 29, 1949 in Wheeler to Houston and Betty Anderson. She married Clifford Lee McDonald on April 16, 1966 in Alanreed. She had been a longtime resident of McLean where she worked at Marie Foundations and later a secretary in the oil/gas industry prior to her retirement. Linda hobbies included quilting, gardening, baking, and cooking. She was a former Boy Scout Leader and a former 25 year member of the McLean Volunteer Fire Department. She was a devoted wife and a dedicated mother and grandmother to her kids, grandkids, nephews, and family. She loved taking care of everybody. She was a member of the Heald Methodist Church. She is preceded in death by her parents; a brother, Dean Anderson; and a sister, Sue Anderson. Survivors include her husband, Clifford McDonald of McLean; her son, Robert McDonald and wife Debbie of McLean; her brother, Brett Simmons of Dallas; 6 grandchildren; 12 great grandchildren; and several aunts, uncles, cousins, nieces, and nephews. The family request memorials be sent to the Heald Methodist Church / PO Box 125 / McLean, TX 79057.

The family of Linda Jolene McDonald created this Life Tributes page to make it easy to share your memories.

Send flowers to the McDonald family.