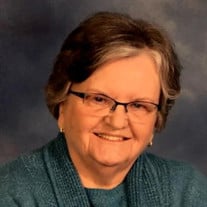 Leola Mae "Lea" Reynolds, 79, of Amarillo died Wednesday, December 30, 2020, in Amarillo. Memorial mass will be celebrated 10:00 AM Tuesday, January 12, 2021, in St. Mary's Cathedral in Amarillo with Father Tony Neusch as the celebrant. Private family inurnment will be in St. Mary's Cemetery in Clarendon. Cremation & Arrangements are by Robertson Funeral Directors of Clarendon. Lea was born July 16, 1941, in Amarillo to James Tate and Flora Mae Poovey. She married Robert Smith on June 19, 1993, in Amarillo. She earned her bachelor’s degree from West Texas State University and her master's degree from Texas Tech University. She had been a resident of Amarillo since 1971. She loved children and worked as a teacher and an administrator for both public and private schools. She was a master quilter and gardener. Lea loved collecting dolls, restoring dolls, reading, crafts, and painting. She had a love of being Catholic and had a strong faith. She was a member of St. Mary's Cathedral in Amarillo. She was preceded in death by her parents and a brother, Bobby Tate Poovey. Survivors include her husband, Robert Smith of Amarillo; her daughter, Chele Zuniga and Johnny Williams of Amarillo; her sisters, Jan Chandler and husband Jim of Amarillo, and Elaine Poovey of Borger; her grandson, Zachary Zuniga and wife Amber of Amarillo; her great grandchildren, Madi and Sawyer; and several nieces, nephews, and numerous cousins. In lieu of flowers, the family request memorials be sent to St. Mary's Cathedral School in Amarillo.

The family of Leola Mae Reynolds created this Life Tributes page to make it easy to share your memories.

Send flowers to the Reynolds family.