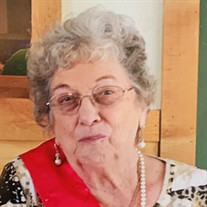 LaVerne Coleman Bentley Belote, 82 of Dozier died Friday, January 14, 2022 in Canadian. Services will be held at 10:00am on Wednesday, January 19, 2022 at the Church of Christ in Shamrock with Jerry Dorman and Jay Tyree, pastor, officiating. Family will receive friends for visitation on Tuesday from 4:00-6:00pm at the funeral home. Arrangements are by Robertson Funeral Directors of Shamrock. Ava Laverne Coleman was born on October 22, 1939 in Wellington, TX to John Alexander (Alex) & Lettie Mary Hooten Coleman. She was the last of 8 children. She attended Samnorwood Schools and graduated in 1958. LaVerne married Richard Bentley on January 16, 1959 in Dozier Texas at the home she grew up in and where she would live out the rest of her life. After Richard and Laverne were married, they set about farming and ranching in the Dozier community. When you are raising four boys and have no daughters it doesn’t take long to become one of the boys which she quickly did. Her love for Jesus and staunch work ethic were evident in everything she did. She always said it takes a lot of love to raise boys and love is what she did to everyone who crossed her path always putting others before herself. Laverne hauled hay, hoed cotton, built fence, fed cattle, and calved 132 heifers one snowy spring, a fact she was proud of. Proverbs 31 tells us of a woman whom we should strive to be and LaVerne exhibited these qualities so truly throughout her life. She was an avid supporter of Samnorwood public schools. Laverne was a member of the Young Matrons for fifty years. Richard and she served the young farmers and ranchers organization as well for many years. Later she drove a school bus and drove a truck alongside Richard. She enjoyed talking fiery politics with you. Laverne was a lifetime member of the Dozier Church of Christ and attended the Shamrock Church of Christ in her most recent years. At 75 years old she married Malcolm Belote. Together they added many miles to their cars daily. We are all so grateful to the Lord for this woman and her life well lived. Throughout her life, LaVerne witnessed her fair share of tragedy. She witnessed her parent’s death and all seven siblings pass away, some of them leaving behind young families. She was preceded in death by her parents; by her husband Richard Allen Bentley, on April 29, 2015; 4 brothers, James Scott Coleman, Jack Clinton Coleman, Joe Alex Coleman, Donald Coleman; 3 sisters, Mildred Coleman Bell, Julia Camilla Coleman Ray, Aleta Ellen Coleman Thompson; and a nephew Alex Bell. She is survived by husband Malcolm Belote, 4 sons, Ricky Bentley and wife Carol of Amarillo, Michael Bentley and wife Rhonda of Canadian, Steve Bentley and wife Aletha of Shamrock, John Bentley of Samnorwood; 9 grandchildren; 17 great-grandchildren; and by several nieces, nephews, cousins and in-laws. In lieu of flowers, the family asks that you send memorial contributions to the Dozier Cemetery Association, c/o Doug Coleman Jr., 15767 FM 1036, Shamrock, Texas 79079

LaVerne Coleman Bentley Belote, 82 of Dozier died Friday, January 14, 2022 in Canadian. Services will be held at 10:00am on Wednesday, January 19, 2022 at the Church of Christ in Shamrock with Jerry Dorman and Jay Tyree, pastor, officiating.... View Obituary & Service Information

The family of LaVerne Coleman Bentley Belote created this Life Tributes page to make it easy to share your memories.