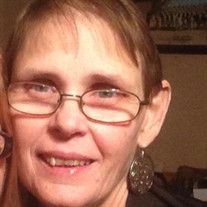 Laura Ann Berry, 63, of Amarillo died Saturday, April 18, 2020 in Fort Worth. Private graveside services will be Friday, April 24, 2020 in Citizens Cemetery in Clarendon. Arrangements are by Robertson Funeral Directors of Clarendon. Laura was born January 14, 1957 in Lubbock to Lamon and Velta Beevers Whitaker. She married Robert A. Berry, Sr. on March 8, 1990 in Clovis, New Mexico. She had been a resident of Amarillo since 1985 and was a homemaker. She was preceded in death by her parents, Lamon and Velta whitaker; her husband on October 7, 2019; her brother in law, Robert Berry, Jr.; and her beloved pet, Wicket. She is survived by her son, Darrell Whitaker of Colorado Springs, Colorado; her daughter, Jami Tucker of McKinney; two sisters, Tammy Berry and Ruthie Terry both of Venus, Texas; her grandchildren, Michaela Whitaker, Tierra and Ebony Jernigan, Aleena and Rey Jr. Whitaker, James, Luke, Leia, and Sasha; her nieces and nephew, Stormi and Kelly Berry, and Heather Terry; and many more loved bonus children, grand, and great grandchildren.

The family of Laura Ann Berry created this Life Tributes page to make it easy to share your memories.

Send flowers to the Berry family.