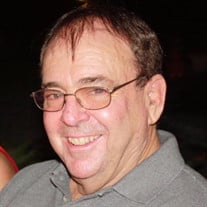 Larry Roger Garrison was born March 28, 1947, in Wheeler, Texas to Harry Jackson “Jack” Garrison, Jr. and Clare O’Gorman Garrison. He passed away on June 3, 2022 in Round Rock, Texas. Larry graduated from Wheeler High School in 1965 and attended West Texas State University. He enlisted in the Navy and served briefly before receiving a medical discharge. He worked for Patio Shop-Fireplace Center in Amarillo before returning to Shamrock, Texas, where he became a business partner in H.J. Garrison Oil Company with his father and brother, Harry Garrison. He retired from the family business in 2012. In retirement, he claimed Austin and later Rockdale, Texas, as his second home. Larry was a lifelong member of St. Patrick’s Catholic Church in Shamrock and his faith was very important to him. He was a member of the Knights of Columbus, American Legion and Lions Club. He is preceded in death by his parents Jack and Clare Garrison, his brother Harry Jackson Garrison III and a nephew, Stuart Wayne Cross. He leaves behind his sisters Kathleen Cross, Pat (Jim) Grametbauer and Pam ( David) Vogt; sister-in-law Jan Garrison; nieces and nephews Michelle (Rusty)Smith, Monica (Dale) Kidd, Roger (Cindy) Cross, Greg (Laura) Garrison, Sherilyn (Chris) Toelle, Paul (Marysa) Garrison, Matt Vogt and Adam (Victoria) Vogt and numerous great and great-great nieces and nephews. Larry enjoyed traveling and visited most of the United States (with Colorado his all-time favorite) and 13 countries focusing on European and South Pacific travels with a special interest in World War II history in those parts of the world. Larry loved people,. He never met a stranger, meeting and making new friends wherever he went and always finding a common or unique interest with those he befriended. Larry was like a textbook when it came to planes, trains and automobiles and family, local U.S. , world and ancient history. He loved to share stories, laugh and make life fun. A visitation and rosary will be held Tuesday, June 7, 2022 at 6:30 PM at Robertson Funeral Home, 311 N. Wall St., Shamrock, Texas. A funeral Mass will be held Wednesday, June 8, 2022 at 10:00 AM at St. Patrick’s Catholic Church, 500 S. Main St., Shamrock, with graveside service immediately following. A special thanks to the nurses and technicians at Davita Kidney Care in Taylor, Texas and a special thanks to all his prayer warriors. In lieu of flowers, the family suggests donations be made to St. Patrick’s Catholic Church, P. O. Box 49, Shamrock, Texas 79079

The family of Larry Roger Garrison created this Life Tributes page to make it easy to share your memories.

Send flowers to the Garrison family.