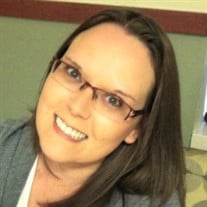 Kristina Kay Whitley Walker, 41, of Shamrock, Texas passed away peacefully at her home in her sleep Monday morning, July 6th after a five year battle with Cushing's disease. Kristina was born February 7, 1979 in San Angelo, Texas, to her parents Judith Ann (Moya) and Howard Bruce Whitley. Kristina is survived by her mother, Judith and step father Robert Bacon of Shamrock, Texas; her brother, B.J. Whitley and wife Alexis of Weatherford, Oklahoma; step sister, Dawn White of Largo, Florida; Step brother, Trevor Bacon and wife Janessa of Dunedin, Florida; half sister, Montana Whitley and half brother, Garrett Whitley both of Austin, Texas; Paternal Grandmother, Eloise Whitley of Junction, Texas; aunt, Pat Willmon and husband James of Whitney, Texas; aunt, Debbie Farrell and husband Mark of Victoria, Texas; uncle, Gary Don Whitley and fiance Carol of Abilene, Texas; uncle, Jimmy Moya and wife Pam and uncle, Frank Moya and wife Melanie of Shamrock, Texas; nieces, Kira White of Largo, Florida, Skylar Whittle and Harper Bacon of Dunedin, Florida, Miley and Gavina Whitley of Weatherford, Oklahoma, and nephew, Oliver Bacon of Dunedin, Florida; She is also survived by several cousins. Kristina was preceded in death by her maternal grandparents, Santiago and Juanita Moya; a cousin, James Moya; and her paternal grandfather, George Whitley of Junction. Kristina graduated from Jacksonville High School in Jacksonville, Illinois, in 1997. She later moved to Pinellas Park, Florida, where she pursued a career in emergency dispatch and paralegal services. Kristina was a fun loving, free spirit who enjoyed her independence. Her optimistic outlook and "I can do it" attitude carried her through life and helped her reach her goals. She had a caring soul and was known to take in a stray dog or cat and leaves behind her fur babies Destin, Raylon, and Lucy. Being an aquarius, her interests were wide and various, and she absorbed information with a passion. She enjoyed music of all genres and loved to dance. She was loyal to no end and once you were her friend, you were a friend for life. She would do anything to help someone in need. Her happiest times were with family and friends, especially spoiling her nieces and nephews. She will be dearly missed by all. Her favorite spot on Earth was the beach at Shell Island off the Florida coast, and this is where she will spend eternity. There will be a celebration of life service at Calvary Christian Fellowship Church in Shamrock on Saturday, July 18, 2020 at 11:00 AM followed by a luncheon for family and friends in the Fellowship Hall. In lieu of flowers, the family requests donations to the ASPCA.

Kristina Kay Whitley Walker, 41, of Shamrock, Texas passed away peacefully at her home in her sleep Monday morning, July 6th after a five year battle with Cushing's disease. Kristina was born February 7, 1979 in San Angelo, Texas, to her... View Obituary & Service Information

The family of Kristina Kay Walker created this Life Tributes page to make it easy to share your memories.

Send flowers to the Walker family.