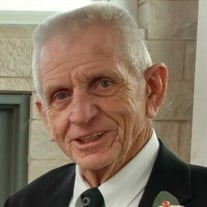 Kinneth William Hambright, 91, of McLean died Saturday, June 11, 2022 in McLean. Memorial services will be 11:00 AM Thursday, June 16, 2022 in the McLean Church of Christ with Russell Crawford and Justin Hopper, officiating. Cremation & Arrangements are by Robertson Funeral Directors of McLean. Kinneth was born July 31, 1930 in Granite, Oklahoma to F.E. and Barbara Windom Hambright. He married Laure Pettit on September 23, 1955 in McLean. He had served several years in the United States Army. He had been a resident of McLean most of his life and was proud to call McLean home. He also spent time in San Isabell, Colorado in the summers. He enjoyed camping, hiking, but most of all fishing. He was a hard working man, a master carpenter, and his family referred to him as Superman. Kinneth was a member of the McLean Church of Christ. He was preceded in death by his parents; a brother, Gene Hambright; a son in law, Allen Crawford; and a grandson, Major Nathan Anderson. Survivors include his wife of 66 years, Larue Hambright of McLean; his children, Kinnette Anderson of Holdrege, Nebraska, Beth Crawford of Holdrege, Nebraska, Bill Hambright and wife Vicki of Lubbock, and Tony Hambright and wife Niki of Amarillo; his nephew, Chris Moore and wife Tresa of Woodward, Oklahoma; his niece, Carmel Hogue and husband Bryan of Woodward, Oklahoma; 18 grandchildren; 16 great grandchildren; and 1 great great granddaughter. In lieu of flowers, the family is requesting memorials be sent to the McLean Volunteer Fire Department.

The family of Kinneth William Hambright created this Life Tributes page to make it easy to share your memories.

Send flowers to the Hambright family.