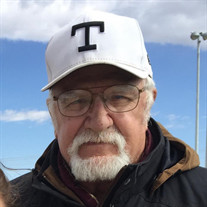 Kenneth Roy LaFavers, age 79 of Breckenridge, Texas, passed away on Friday, May 7, 2021, in Abilene, Texas. A memorial service will be held at 11:00 a.m., Saturday, May 29th in the United Methodist Church in Hedley, Texas, with Pastor Stan Cosby officiating. Kenneth was born September 13, 1941, in Amarillo, Texas, to Ann and William LaFavers. As a child, Kenneth and his brothers spent a great amount of time at The Maverick Boys Club, where he participated in various activities. He graduated from Amarillo High School in 1960, and went on to attend Amarillo College and West Texas State University, where he graduated with a Bachelor of Science degree in 1968. Kenneth later attended Northwestern Oklahoma State University and received his Master of Education degree in 1977. He married Jeanette McDonald on July 25, 1975 in Raton, New Mexico. He spent several years in education at Palo Duro High School in Amarillo, John Jay High School in San Antonio, and Hobbs High School in Hobbs, NM. Kenneth had a few years away from education, working for NL Treating Chemicals, Baker Hughes, and Exxon Chemical. Later, he decided to follow his passion of coaching and teaching, finishing the last thirteen of his forty-one year career in education at Waxahachie ISD. After his retirement from Waxahachie, he continued to substitute teach in Breckenridge, Texas. Kenneth loved hunting, fishing, camping, and watching sports. He also enjoyed watching his grandchildren participate in sporting events. He was preceded in death by his wife Jeanette, two sisters Barbara Besaw and Juanita Batterton, a brother Bill LaFavers, and his parents. He is survived by six children, Hoby Smith and wife Denita of Wylie, David LaFavers and wife Marci of Calvert, Jill Kirk and husband Doug of Breckenridge, Kari Lindsey and husband Bob of Hedley, Barron Smith and wife Gennifer of Valley View, and Kenneth (Scooter) LaFavers and wife Stephanie of Portland; a sister Ramona Langton and husband Rick of Pittsburgh, three brothers, Richard LaFavers and wife Glenda of Victoria, Jimmy LaFavers and wife Peggy of Amarillo, and Joe LaFavers and wife Linda of Bennett, Colorado; 21 grandchildren and 29 great grandchildren. In lieu of flowers, memorials may be made to The Maverick Boys & Girls Club in Amarillo, Texas.

Kenneth Roy LaFavers, age 79 of Breckenridge, Texas, passed away on Friday, May 7, 2021, in Abilene, Texas. A memorial service will be held at 11:00 a.m., Saturday, May 29th in the United Methodist Church in Hedley, Texas, with Pastor Stan... View Obituary & Service Information

The family of Kenneth Roy LaFavers created this Life Tributes page to make it easy to share your memories.

Send flowers to the LaFavers family.