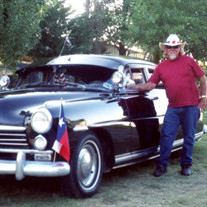 Kenneth Floyd Carden, 82, of Howardwick died Saturday, November 28, 2020 in Howardwick. No services will be scheduled. Cremation & Arrangements are by Robertson Funeral Directors of Clarendon. Ken was born July 7, 1938 in Pineville, Missouri to Kenneth Eugene and Velma Payne Carden. He was a butcher supervisor for Kroger and Dillon's prior to his retirement. After retirement, he had a gift for taping and textured many walls in several churches, homes, and businesses. He was stuck in the 1950's era, and had a love for antique cars. He had been a resident of Howardwick since 1997 and married Carol Kuschel on November 8, 2000 in Howardwick. He was a member of the First Assembly of God in Clarendon. He was preceded in death by his parents. Survivors include his wife, Carol Carden of Howardwick; his sons, Kenneth Carden of Phoenix, Arizona, Greg Carden of Wichita, Kansas, and Cade Carden of Reno, Nevada; his daughters, Laura Owens of Pittsburg, Kansas, Rayne Sweezy and Nikki Blair both of Kansas; a step daughter, April St. Clair of Clarendon; several brothers and sisters; numerous grandchildren and great grandchildren; and 1 great great grandchild. In lieu of flowers, the family request memorials be sent to Donley County Senior Citizens.

The family of Kenneth Floyd Carden created this Life Tributes page to make it easy to share your memories.

Send flowers to the Carden family.