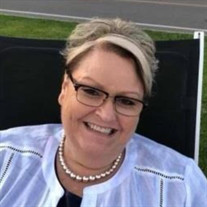 Katie Lynn Cornell, 52, of Wheeler, Texas passed away Monday, November 9, 2020 in Amarillo, Texas Memorial Services will be 2:00 PM Saturday, November 14, 2020 in Cornerstone Church in Wheeler with Erron Mercer, officiating. Cremation & Arrangements are by Robertson Funeral Directors of Wheeler. Katie was born on June 15, 1968 in Colorado Springs, Colorado to Richard and Lina Jackson. She graduated from Wheeler High School in 1986 and graduated from Amarillo College in 1996 with a physical therapy assistant degree. She loved her patients like they were family. She made many memories traveling with her daughter, Kayla. She was known for her giving heart and smile. Katie loved spending time with her family and having family dinners. On June 3, 2016 She married her best friend, Matt and they also loved to travel. In 2019, her heart was full when she became a Mimi to her granddaughter, Zoey. Katie will be remembered as a loving wife, mother, mother in law, Mimi, sister, aunt, and friend. Katie was preceded in death by her parents, Richard and Lina Jackson; 3 brothers, Tom Jackson, Jim Jackson, and Pat Jackson; and a sister, Terry Jackson. She is survived by her husband Matt; her daughter, Kayla Scott and husband Shane; a step son, Justin Cornell; her granddaughter, Zoey Scott; a brother, Bill Jackson; 2 sisters, Nancy Webb and Rose McKinley; and numerous nieces and nephews.

The family of Katie Lynn Cornell created this Life Tributes page to make it easy to share your memories.

Send flowers to the Cornell family.