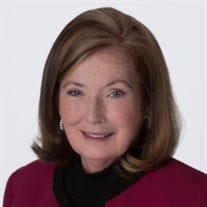 After experiencing a life even bigger than she dreamed for herself, Kathryn Dixon Brothers, died on August 18th, in Keller, Texas. Kathy was someone who found a way to do it all—though not necessarily all at one time. She was an amazing wife, mother, grandmother, friend, and career woman. Raised in Houston, Kathy headed to The University of Texas at Austin where she met a handsome law student who would change her life forever, Charles A. Brothers. Kathy described the beginning of married life with Charlie who became a lawyer for the Air Force as “a twenty-year vacation”. She was able to get involved and share her gifts through volunteering or teaching at each place. Good fortune and hard work had the family stationed in amazing places such as Hawaii, The Air Force Academy, and Germany. Having a history degree in addition to her English degree prompted Kathy to drag her family all over Europe. She certainly added culture to her kids’ lives. (Even if they were fighting over checkers in the backseat while crossing the Rhine River.) Traveling the world continued to be a passion even when returning to the States. She was fearless and even travelled on her own to favorite cities such as Florence and Paris. Once the Air Force brought the family back to Austin, Texas, Kathy led the way in the 1980’s by entering the technical writing world. She was a mover and a shaker excelling wherever she worked, ultimately ending up at Fischer-Rosemont where she translated complex technical information into a user-friendly language for consumers. That was her gift. A natural teacher who could write eloquently and would make others better. The best gift Kathy instilled in her children and granddaughter is that there is almost always a way to make anything you want to happen. In the 1960’s, Kathy was miffed when she learned Rhodes Scholars were only male. Flash forward in time and Kathy created her own path of educational excellence. She completed a Masters in Adult Learning and Human Resource at UT as well as taking a course at Merton College at Oxford, England. When she put her mind to something, she would make it happen! Kathy Brothers is survived by her daughter, Tracie Brothers McCoy, her son, Charles Dixon Brothers, her granddaughter, Ryan Elizabeth McCoy, her sisters, Adrienne Rogers, and Denise Cason and numerous nieces and nephews. A celebration of her life will take place on Saturday, August 22nd. Visitation will be at Robertson Funeral Directors in Shamrock from 10am-11am with a graveside service following at 11:30am in Shamrock Cemetery in Shamrock, Texas. In lieu of flowers, donations may be made to: Women’s Storybook Project of Texas: 5524 Bee Caves Road, Building M Austin, TX 78746 www.storybookproject.org

After experiencing a life even bigger than she dreamed for herself, Kathryn Dixon Brothers, died on August 18th, in Keller, Texas. Kathy was someone who found a way to do it all&#8212;though not necessarily all at one time. She was an amazing... View Obituary & Service Information

The family of Kathryn Anne Dixon Brothers created this Life Tributes page to make it easy to share your memories.

After experiencing a life even bigger than she dreamed for herself,...

Send flowers to the Brothers family.