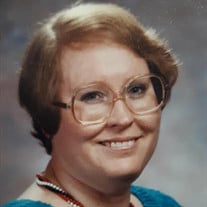 Judy C. Hicks, 70, of Shamrock, went to be with Jesus on March 7, 2022 in McLean. Celebration of Life will be at 10:00 AM Saturday, March 12, 2022 at the First Baptist Church in Shamrock with Mark Howard and Jimmye Cole, officiating. Graveside and burial will follow in Shamrock Cemetery. Arrangements are by Robertson Funeral Directors of Shamrock. Judy was born on December 27, 1951 to Annie Catherine (Conatser) and Orvel Evin Luster in Canyon. She grew up in Wildorado, attending Palo Duro Baptist Church where she gave her life to Jesus at a young age. She graduated from Vega High School in 1969. She married Donald Eldon “Donnie” Smith on January 16, 1970 and they made their home in Vega. They had two children, DeAnna ReNee’ and Michael Eldon. Donnie passed away in 1982. She then set out to get her teaching degree, graduating from WTSU in 1985. Her first position was teaching English in the fall of 1985 at Mobeetie High School, where she taught for three years. While in Mobeetie she was introduced to Louis Paul Hicks by mutual friends and they were married on October 16, 1987. They moved to Amarillo in 1988 where she taught for two years. They had one child, Dayna Rachelle. They moved to Shamrock in 1991 and she taught one year at Samnorwood High School and one semester of English at SWOSU at the Sayre, Oklahoma campus before becoming a full time homemaker. She was very active in the First Baptist Church and taught Sunday School and Awanas for many years and later helped with the church’s Ministry Center. She was also active in the community with Relay for Life, delivering Meals on Wheels, “Fill the Boot” and other fundraisers for the fire department until her health began to fail. Judy shared her faith openly and wanted everyone she knew and met to love Jesus as much as she did. She was not afraid to tell you what she thought either. She wrote poetry and sang at church. She did not know a stranger. She enjoyed spending time in the mountains. But above all else, she loved her family and friends beyond measure and told them so often. Judy was preceded in death by her parents Orvel and Catherine Luster, husband Donnie Smith and brother Orvel Ray Luster. She is survived by her husband Paul Hicks, daughter DeAnna Vandever and husband Ronny of Mobeetie, son Michael Smith and wife Gena of Mobeetie and daughter Dayna Hicks of Mobeetie. Seven grandchildren: Raysha Walker (Justin), Ryan Vandever (Reba), Tyler Smith (Torie), Taylor Smith (Clarisa), Kellan Quarles, Kaylan Smith and Kelton Quarles. Nine great grandchildren: Ian, Victor, Julia, Emi, Adi, Kyler, Rylan, Ransyn and Lakin. Sisters: Ruth Buchanon of Amarillo, LaNita Balko of Wickett, Linda Browning (Sam) of Miami. Sister-in-Law Rojanna Occhi of Tucson, Arizona and numerous cousins, nieces and nephews. The family requests memorials be made to the Shamrock Volunteer Fire Department.

Judy C. Hicks, 70, of Shamrock, went to be with Jesus on March 7, 2022 in McLean. Celebration of Life will be at 10:00 AM Saturday, March 12, 2022 at the First Baptist Church in Shamrock with Mark Howard and Jimmye Cole, officiating. Graveside... View Obituary & Service Information

The family of Judy Carol Hicks created this Life Tributes page to make it easy to share your memories.

Send flowers to the Hicks family.