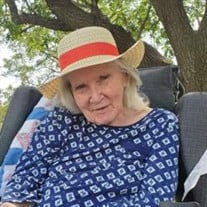 Juanell Tate Carson, 92, of Hedley passed away peacefully on Tuesday, November 9th, 2021 at her home surrounded by her loved ones. Funeral services will be at 10:00 a.m. Saturday, November 13, 2021 at the Hedley Methodist Church. The family will receive friends and family for visitation from 4:00-6:00 p.m. Friday, November 12 at Robertson Funeral Home in Clarendon, Texas. Juanell Tate Carson was born on December 14, 1928. Dr. Webb delivered her at home on the Tate Place. He held her up and said, “Isn’t she a fine one!” She was the youngest of three, born to Thomas Zack Tate and Myrtle Lola Clark Tate. Her brothers, Tommy Dean Tate and Orval Winfred Tate preceded her in death. Juanell was a 1945 graduate of Quail High School as was her husband Billy Don. Juanell and Bill were married on October 5,1947 at the Hedley Methodist Church. Juanell was a secretary, bookkeeper, co-owner of Morton Lumber in Borger and Moffitt Hardware in Hedley with her husband Bill. Juanell and Bill retired to the farm in Hedley, the Tate Place, that was settled by the Tate’s in 1907. Bill and Juanell farmed, raised cattle, & delighted in having a big garden and participated in the Farmer’s Market in Amarillo. Juanell is survived by her daughter, Susan Carson Cosby, and son-in-law Stan Cosby and son Tom Carson and daughter-in-law Patricia, 5 grandchildren, 10 great-grandchildren and 9 great great- grandchildren and a host of friends! Juanell was a member of the Hedley Methodist Church, Hedley Lioness Club and the Quail Booster Club, and was an amazing seamstress. The family would like to thank Kindred Hospice and the many loving caregivers that provided care for Juanell. The family suggests memorial contributions be made to the Rowe Cemetery Association, Inc., P.O. Box 213, Hedley, TX 79237.

Juanell Tate Carson, 92, of Hedley passed away peacefully on Tuesday, November 9th, 2021 at her home surrounded by her loved ones. Funeral services will be at 10:00 a.m. Saturday, November 13, 2021 at the Hedley Methodist Church. The family... View Obituary & Service Information

The family of Juanell Tate Carson created this Life Tributes page to make it easy to share your memories.

Juanell Tate Carson, 92, of Hedley passed away peacefully on...

Send flowers to the Carson family.